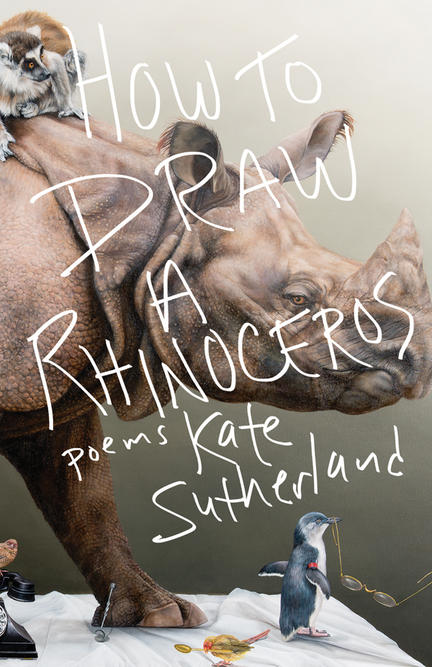 How to Draw a Rhinoceros, the first book of poems by Canadian writer, scholar, and lawyer Kate Sutherland, mines centuries of rhinoceros representations in art and literature to document the history of European and North American encounters with the animal--from the elephant-rhinoceros battles staged by monarchs in the Middle Ages; the rhinomania that took hold in response to the European travels of Clara the 'Dutch' Rhinoceros in the mid-1700s; the menageries and circuses of the Victorian era; the exploits of celebrated twentieth-century hunters like Teddy Roosevelt and Ernest Hemingway; and the trade in rhinoceros horn artefacts that thrives online today. Along the way, it explores themes of colonialism, animal welfare, and conservation, combining Robert Kroetschian documentary poetics with the meticulous research and environmental passion of Elizabeth Kolbert, to successfully examine the centuries-long path of the rhinoceros that's brought it to the brink of global extinction.

Readers of contemporary poetry, as well as those interested in natural history, animal welfare, and conservation, and people who have followed Sutherland's scholarly and literary careers, will relish the rich detail and odd tales of historical rhinoceroses and the people who have kept, shown, and traded in them, as depicted using a range of poetic techniques that only a critical eye like Sutherland's could deliver.

Kate Sutherland was born in Scotland, immigrated to Canada as a child, and grew up in Saskatoon. She studied first at the University of Saskatchewan, then at Harvard Law School. She is the author of two collections of short stories, Summer Reading (winner, Saskatchewan Book Award for Best First Book) and All In Together Girls, and the poetry collection, How To Draw A Rhinoceros (shortlisted for a Creative Writing Book Award by the Association for the Study of Literature and the Environment). Her stories and poems have appeared in various magazines and anthologies including Best Canadian Poetry and Best American Experimental Writing. She has done residencies at Hawthornden Castle in Scotland and at the Leighton Artist Studios in Banff. She lives in Toronto where she is a professor and conducts research in the fields of Tort Law, Feminist Legal Theory, and Law and Literature at Osgoode Hall Law School, York University.

Praise for How to Draw a Rhinoceros:

"Kate Sutherland has created a surprising, beautiful and often tragic menagerie of poems about a powerful, peaceful beast that has the misfortune of being both magnificent and magnificently horned. Her brilliant resurrection of 18th-century rhinosuperstar Clara is an enchanting bonus." --Stuart Ross, author of A Hamburger in a Gallery and A Sparrow Came Down Resplendent

Other titles by Kate Sutherland

The Bones Are There

All In Together Girls

The Impact of Charter Rights on Canadian Law and Politics

Most Anticipated: Our Fall 2016 Poetry Preview