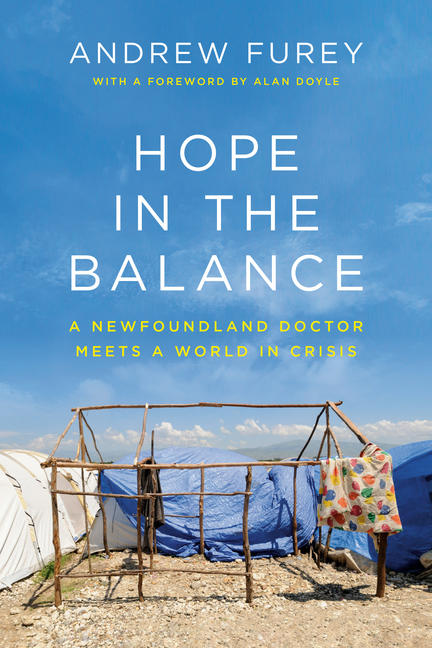 NATIONAL BESTSELLER
Dr. Andrew Furey, an orthopedic surgeon, was sitting by the fireplace at his home in St John's, Newfoundland and Labrador, watching TV after work, when dreadful images of the aftermath of an earthquake in Haiti burst in on the cosy domestic scene. Human suffering on an epic scale was being documented in real time. Dr. Furey spent a sleepless night, and woke knowing he had to help in some way. In what has been a theme throughout Newfoundland and Labrador's history, he found himself answering the call.

Dr. Furey formed a team of three--himself; his wife and pediatric emergency room physician, Dr. Allison Furey; and orthopedic surgeon Will Moores--and together they travelled from to Port-au-Prince, Haiti, where they spent a week volunteering. The challenge seemed overwhelming: a multitude of badly injured victims, horrendous working conditions and overstretched aid agencies. But somehow the trio did not lose hope. Instead, they redoubled their efforts.

After returning from that first mission, Dr. Furey founded Team Broken Earth--an expert, unbureaucratic, fleet-footed volunteer task force of physicians, nurses and physiotherapists committed to providing aid in Haiti. The organization has continued to grow, recruiting volunteers from all over Canada. It has carried out many more missions to Port-au-Prince and has expanded its operations to other countries like Bangladesh, Guatemala, Ethiopia and Nicaragua. And its mission has expanded in other ways, with education and training for local medical professionals now at the heart of its endeavour.

Dr. Andrew Furey tells the story of Team Broken Earth's founding and remarkable work with vivid immediacy and raw honesty. He shares his doubts and failures and moments of near-despair. He explores how his Newfoundland and Labrador upbringing has informed his efforts abroad. And he reaches an optimistic conclusion that will leave readers inspired to bring about positive change in their own lives.

DR. ANDREW FUREY is an orthopaedic surgeon and politician. He was born and raised in St. John's, Newfoundland and Labrador.

Dr. Furey's dedication to medicine and philanthropy, which he attributes to the examples of his parents and family, led him to spearhead the non-profit organization Team Broken Earth in 2010, following the devastating earthquake in Haiti in January of that year. Dr. Furey organized a task force of Canadian physicians, nurses, and physiotherapists to travel to the affected areas and offer medical support and training. Since that time, Team Broken Earth has grown to include teams all across the country. Dr. Furey also cofounded a mental health and addictions charity, A Dollar a Day.

In August 2020, Dr. Furey was voted leader of the Liberal Party of Newfoundland and Labrador and the province's fourteenth premier.

He lives in St. John's with his wife, Allison, and their three children.

"Team Broken Earth is one of Canada's greatest exports. Andrew Furey tells the story of its founding in vivid, dramatic detail." —Rick Mercer

"Passionate, evocative, and ultimately hopeful—a much needed antidote to a world wrestling with turmoil and uncertainty. Furey writes with an honesty and urgency that add tremendous depth to the storytelling. He doesn't evade difficult questions about the complexities of humanitarian aid in disaster zones but embraces them, offering a rich and nuanced portrait of what it truly means to 'help.'" —Dr. Samantha Nutt, founder and president of War Child Canada and War Child USA

"I have always believed that the call to public life and service to others is one of the noblest endeavours in our society. In today's cynical world, it is refreshing and inspiring to read the incredible selfless journey of Dr. Andrew Furey. From his humble roots on one island answering the call for help on another island, Dr. Furey walks the talk of the Hippocratic Oath—Into whatever homes I go, I will enter them for the benefit of the sick. Dr. Furey sees hope and a future where others do not and answers the call to help his brothers and sisters in need. In these challenging times, this book will leave you believing in the fact that individually we can make a difference. Hope makes a difference."—The Right Honourable Jean Chrétien

"Furey's journey from well-intentioned naiveté, through the darkest horror, to ethical resolve, is deeply reminiscent of my own journey in Rwanda. Despite the enormity of the need, the relentlessness of the adversity, is Furey's indefatigable, inextinguishable hope." —Lieutenant-General (ret) the Honourable Roméo Dallaire

"There are lots of stories about giving back. Andrew Furey's story is about giving your all. Hope in the Balance shows us just how small our world is and how much of an impact one person can make. The book is exactly what we need in these trying times." —Mark Critch