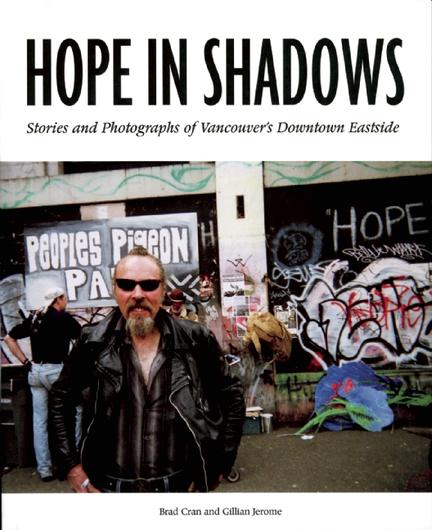 Winner of the City of Vancouver Book Award

Shortlisted for the Roderick Haig-Brown Regional Prize (BC Book Prizes)

Longlisted for the George Ryga Book Award for Social Issues

Excerpted in The Globe and Mail and The Vancouver Sun and on TheTyee.ca

Residents of Vancouver's Downtown Eastside are not bound by poverty or addiction but rather driven by a sense of community, kinship, and above all, hope. For each of the past five years, Pivot Legal Society's annual Hope in Shadows photography contest has empowered residents of Vancouver's Downtown Eastside by providing them with 200 disposable cameras to document their lives--thus giving them an artistic means to enter the ongoing and often stormy dialogue over the place they call home. Since the contest's inception, DTES residents have taken over 20,000 images of their neighbourhood. Working with this archive, Brad Cran and Gillian Jerome have collected the personal stories behind these stunning photographs.

Hope in Shadows offers readers an intimate and honest look at what it really means to live in Canada's poorest neighbourhood. The result is not at all bleak, but rather is full of grace, dignity, and plain simple truths that put a human face on the single most misunderstood community in Canada. This, then, is its story: about First Nations people who survived the residential school system; sex workers whose poor treatment at the hands of authorities precipitated the murder of dozens of women; those who cope with addiction and inadequate living conditions; those who overcome loss and search for loved ones; and the transformative power of hope and forgiveness.

In surprising and astounding ways, Hope n Shadows will not only change the way you think about the Downtown Eastside and other impoverished neighbourhoods; it will also change your view of society as we know it, and of those who are forced to live in its shadows.

A co-publication with Pivot Legal Society, a nonprofit legal advocacy organization located in Vancouver's Downtown Eastside. Its mandate is to take a strategic approach to social change, using the law to address the root causes that undermine the quality of life of those most on the margins. Pivot believes that everyone, regardless of income, benefits from a healthy and inclusive community where values such as respect and equality are strongly rooted in the law.

Brad Cran is the publisher of Smoking Lung Press, a contributing editor at Geist Magazine, an event host at the Vancouver International Writers Festival and the former executive director for the Federation of BC Writers. His poetry has appeared in publications across Canada including The Globe and Mail and in the anthologies Breaking the Surface, Hammer & Tongs and Why I Sing the Blues. He has appeared on CBC radio, Book Television, Chek 6 Television, and been profiled in The Georgia Straight, The Vancouver Sun, Monday Magazine, The Westender, The National Post and First Chapter: The Canadian Writers Photography Project.

Gillian Jerome is a mother, writer, teacher who lives on the unceded land of the x?m??k??y??m (Musqueam), S?wx_wú7mesh (Squamish) and Sel?íl?witulh (Tsleil-Waututh) Nations, land and water she is grateful for and responsible to. Her first book of poems, Red Nest (Nightwood Editions, 2009), was nominated for the Dorothy Livesay Poetry Prize and won the 2010 ReLit Award for Poetry. She co-edited an oral history project, Hope in Shadows: Stories and Photographs from Vancouver’s Downtown Eastside, which won the 2008 City of Vancouver Book Award. Recently her poems have appeared in Hunger Mountain, New Poetry and GEIST. Having taught literature at UBC for two decades, she is turning her attention toward teaching language arts to Vancouver teenagers.

A sense of kinship and peer support, above all else, comes through in the 32 intimate, engaging stories in Hope in Shadows.... The stories crackle with energy, individuality, and often a determination to be heard.
-Georgia Straight

Although coverage of the Downtown Eastside may be increasing, I don't think anything that has been written about the area has really captured its essence as well as the book Hope in Shadows has.... [It] should be essential reading for every Vancouverite.... This book, and groups such as Pivot Legal Society, are essential to our understanding of this often neglected corner of our city.
-re:place Magazine

An honest portrayal of what it's like to live on Canada's poorest streets.
-Where Vancouver

Hope In Shadows: Stories and Photographs of Vancouver’s Downtown Eastside

The diverse stories in Hope in Shadows offer readers an intimate look at what it means to live in Canada’s poorest neighbourhood. We learn that residents of Downtown Eastside are driven by a sense of community, kinship and hope. This book, which includes black and white photographs from a resident photography contest, was initiated by Pivot Legal Society, a non-profit legal advocacy organization located in Vancouver’s Eastside. Told in the voices of the residents themselves, we learn of their life histories—the addiction, mental illness, family violence, sexual abuse—that led these men and women here. This book puts a human face on the community and illustrates how, with the support and compassion of fortunate persons, marginalized members of society can be empowered.

Other titles by Brad Cran

Other titles by Gillian Jerome