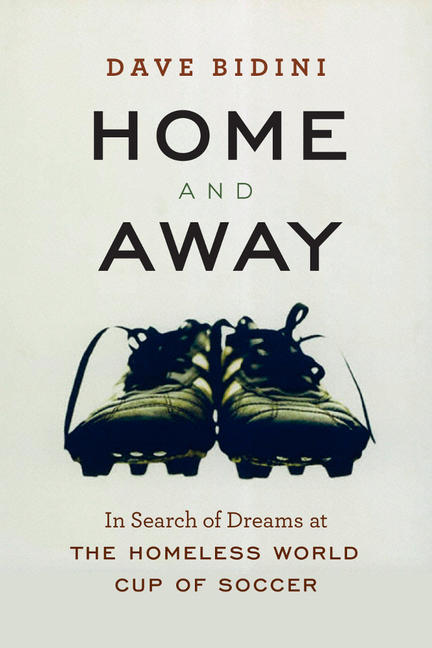 An uplifting tale of travelling with Team Canada as they compete for the Homeless World Cup.

In 2008 Dave Bidini accompanies Homeless Team Canada to the Homeless World Cup in Melbourne, Australia. As he watches team members play and shares their disappointments, frustrations, joys, and triumphs, he comes to care deeply about the players—45-year-old Billy, who is a former addict; the quick-footed 24-year-old Moroccan immigrant Juventus, who refuses to talk about his past; and most of all, the endearing teenaged Krystal, who carries a photograph of her long-dead mother and dreams of a better life. Bidini gets to know the other teams at the World Cup and describes the games themselves, culminating in the final between Canada and Malawi and a chance for the talented Krystal to join a soccer team in Holland. Bidini also begins to understand what this tournament means to people. He sees firsthand the power of sport to transform the lives of those on the edge—how the decision to play this game can mean the difference between survival or heading down a road of addiction, poverty, or crime. Home and Away offers a powerful look at the poor and dispossessed, from the barrios of Mexico City and the shanties of West Africa to the streets of North America and Europe, and illuminates the renewed meaning that these homeless players find in the beautiful game.

Dave Bidini's first book, published in 1998, was the popular and critically acclaimed On a Cold Road, about what it's like to tour Canada in a rock 'n' roll band. He has since written four more books, Tropic Of Hockey (2001), Baseballissimo (2004), For Those About to Rock (2004) and The Best Game You Can Name (2005). When he is not writing or traveling the world, Bidini is rhythm guitarist for the Rheostatics. He also starred in the Gemini Award-winning film The Hockey Nomad. Dave Bidini lives with his wife and two children in Toronto.

Home and Away is both specifically personal yet at the same time universal, the kind of story Bidini tells so well, the kind that makes you want to order another round so you can listen to more, entertaining you long into the night. —Jeff Z. Klein

One of the pleasures of the book is that Bidini meets and talks, it seems, with players and coaches from virtually every country in the tournament, and they all open up to him about who they are and how they got there—a vivid, troubling, funny and diverse parade of characters. —Toro Magazine

I couldn't put this book down. Home and Away humanizes the people on our streets most of us write off and shows the fine line we all walk between functioning and faltering. —Clara Hughes

Home and Away tells the inspiring story of the members of Team Canada and their competitors' journey to the Australian tournament, their trials and tribulations, as well as successes and plans for the future—both on and off the field. —North Shore News

Home and Away captures Bidini's many strengths as a writer—compassion mixed with close observation, humour and a gift for a poetic turn of phrase. His book demonstrates the capacity of sports to act as a therapeutic agent and a catalyst for social change . . . This book has a heart as big as the game itself. —Globe & Mail

Bidini understands that sport, like film or music, can be a powerful storytelling tool . . . he's adept at finding those quirky narratives in athletics . . . that exploration continues with his latest book, Home and Away, which finds Bidini . . . rubbing shoulders with some of street soccer's international elites at the Homeless World Cup of Soccer. —Fastforward Weekly

Home and Away, [is] an instantly and tangibly compelling story of these [Homeless World Cup] players and their moment in the spotlight, underscored by the transformative powers of team sports. —Torontoist

It's the personal side of the story that brings Home and Away to life. The players in the Homeless World Cup, we come to understand, aren't that far removed from the rest of society . . . Not everyone in Home and Away successfully overcomes their demons, but Bidini 's rich and enlightening portraits of the players, coaches, and alumni demonstrate the ways in which community can help make a meaningful and lasting difference in people's lives. —Quill & Quire

Dave Bidini's latest quirky sport story is a mix of familiar and foreign, as he follows the Canadian homeless soccer team to Melbourne, Australia, for the 2008 Homeless World Cup Tournament. Bidini does a fine job portraying the Canadian Team . . . [and] affectionately recounts some of their signature plays on the pitch. But [he] also hints at the fact that homelessness is too complex a problem to be solved by a soccer ball. —Maclean's

A great and important read—incisive, poignant, and warm-hearted. —John Doyle

The book, and I say this as one allergic to sports, is thrilling—an account of what happens when those living in the margins of our society are given an opportunity to shine. —Toronto Star

Art should change the world, change our perceptions of the world, of others, of ourselves. Author Dave Bidini's lastest book, the slim volumed, Home and Away . . . does. Bidini 's book is a catalyst for change. —Northumberland News

Other titles by Dave Bidini

A Wild Stab For It

This Is Game Eight from Russia

A Personal Journey to the North

My Search For The Lost Soul Of The Leafs

The Hockey Sweater and Other Stories

A Team, a Fan, and His City

A Road Trip with Jeff Thomas

Tell Me a Story

Gordon Lightfoot and the Essence of Canada