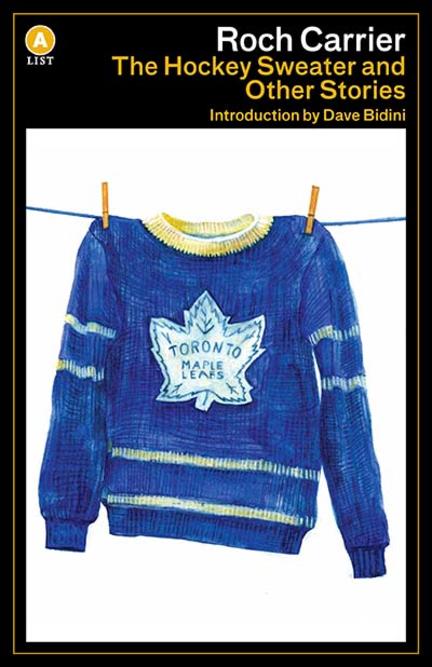 The Hockey Sweater, the title story in this 20-story collection, has become an enduring classic: a Quebec boy and Habs fan is shipped a Toronto Maple Leafs sweater by mistake. It encapsulates everything you need to understand French and English Canada, told with humour and love. This edition features a new introduction.

ROCH CARRIER, who studied at the Universite de Montreal and completed a doctorate in Paris at the Sorbonne, is a novelist, playwright and children's author, and past winner of the Stephen Leacock Medal for Humour. Formerly the director of the Canada Council for the Arts and the National Librarian of Canada, Carrier is a fellow of the Royal Society of Canada and an Officer of the Order of Canada, and he holds many honorary doctorates. A quote from Carrier’s Canadian children's classic The Hockey Sweater could be found until recently on the back of Canada’s five-dollar bill. Carrier lives in Montreal.

DONALD WINKLER was born in Winnipeg in 1940, graduated from the University of Manitoba in 1961, and did graduate study as a Woodrow Wilson Scholar at the Yale School of Drama. From 1967 to 1995 he was a film director and writer at the National Film Board of Canada in Montreal, and, since the 1980s, has been a translator of Quebec literature: in 1994, 2011 and 2013 he won the Governor General’s Award for French to English translation, and has been a finalist for the prize on two other occasions.

Dave Bidini's first book, published in 1998, was the popular and critically acclaimed On a Cold Road, about what it's like to tour Canada in a rock 'n' roll band. He has since written four more books, Tropic Of Hockey (2001), Baseballissimo (2004), For Those About to Rock (2004) and The Best Game You Can Name (2005). When he is not writing or traveling the world, Bidini is rhythm guitarist for the Rheostatics. He also starred in the Gemini Award-winning film The Hockey Nomad. Dave Bidini lives with his wife and two children in Toronto.

Other titles by Roch Carrier

Two Men Who Forever Changed the Course of Canadian History

This Sweater Is for You!

Other titles by Dave Bidini

A Wild Stab For It

This Is Game Eight from Russia

A Personal Journey to the North

My Search For The Lost Soul Of The Leafs

A Team, a Fan, and His City

A Road Trip with Jeff Thomas

Tell Me a Story

Gordon Lightfoot and the Essence of Canada

In Search of Dreams at the Homeless World Cup of Soccer