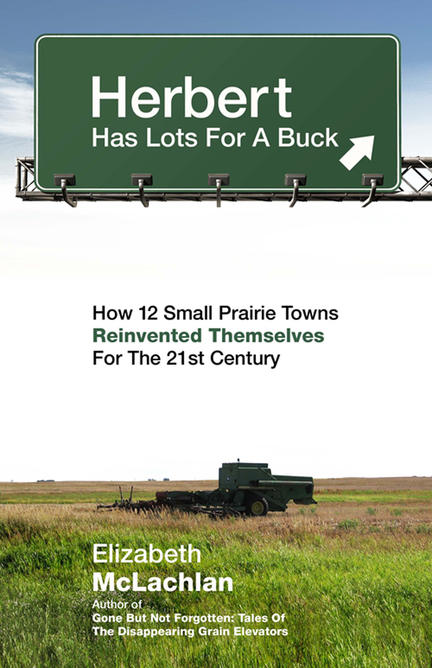 Canada in the twenty-first century is a place of growth and expansion. Cities like Vancouver and Toronto have become word-class destinations for business and tourism. Meanwhile, smaller, less prominent communities face changes of different sorts, as residents depart for the opportunities present in our country’s largest cities. Nowhere is this more apparent than in Canada’s prairie provinces.

Despite changes in population and the loss of such essential services as schools, post offices, and grain elevators, many of Canada’s oldest prairie communities—communities like Craik and Meacham in Saskatchewan, and Vulcan in Alberta—have defied the odds, facing death only to rise again.

In Herbert Has Lots for a Buck, Elizabeth McLachlan investigates how these communities have capitalized on green initiatives, the growing influence of local artists, and even an uncanny connection to one of Star Trek’s most famous icons to not only survive beyond expectations, but thrive.

Elizabeth McLachlan was born in Coaldale, Alberta, and feels fortunate to have lived in eleven rural communities throughout the province. She currently resides in Lethbridge, Alberta, where she works as a freelance writer, editor, and public speaker. Elizabeth has previously published three books with NeWest Press: With Unshakeable Persistence, With Unfailing Dedication, and the best selling Gone But Not Forgotten. Herbert Has Lots For a Buck is her fourth book.

Excerpt: Herbert Has Lots For a Buck: How 12 Small Prairie Towns Reinvented Themselves for the 21st Century (by (author) Elizabeth McLachlan)

I recently drove through the tiny hamlet of Kirkcaldy, in southern Alberta. The town appeared to consist of one street that bowed off Highway 23 at one end and back onto it at the other. I thought it was deserted. There were abandoned buildings and ancient gas pumps, faded paint and broken windows. It was a bright midsummer’s day, yet I saw not a soul.

But wait! There came a German shepherd, bounding happily out to greet me from a flower-gilded yard that was neatly grassed, trimmed, and (thankfully) fenced. And a little farther up the street stood a signpost, proudly announcing the Goldhawks lived here. Another residence, in an arty show of nostalgia, displayed a vintage Alberta Wheat Pool sign at the entrance to its well-kept driveway. Little Kirkcaldy was breathing. Her residents were affluent enough and cared enough to take pride in their yards and homes, to appreciate art and history.

But where was the church? The store? The school? The post office?

Throughout the Canadian prairies (as throughout Canada and the world) rural depopulation is a reality. The myriad reasons spin together in concurrent cause-and-effect cycles. To begin with, mechanization allows fewer people to accomplish more work. Family farms, once prolific enough to warrant a small school every four to six miles, grew in size and diminished in number; diesel locomotives eliminated the need for rural roundhouses and rail crews; dial telephones rendered exchanges obsolete; paved roads and better cars made travelling—and spending money elsewhere—attractive; straightened highways bypassed towns they once bisected; city department stores (and, later, big box chains) offered merchandise at prices small-town shopkeepers couldn’t compete with; branch rail lines terminated passenger service, then freight service, and finally closed completely; grain companies decommissioned hundreds of community elevators; churches closed, government services withdrew, and school districts consolidated. Rural children bused to larger centres for their education never fully returned, their emotional ties with their home communities now weakened, and ease of travel and better job prospects luring them away. In a slow erosion, which began decades ago, farm kids, telephone operators, business owners, elevator agents, railway employees, teachers, post office workers, clergy—and anyone associated with failing businesses and discontinued services—headed for the cities, taking their families, tax dollars and civic leadership skills with them. They left landscapes strewn with abandoned buildings and thinning, aging populations. Cities growing fat with rural migrants soaked up the towns around them, encroaching on an ever-sparser countryside. In the 1940s, when the accumulation of all these changes finally tipped the scales, almost half of Canada’s population was rural. Today, 80 per cent live in urban environments, and more than half the farms are large-scale, corporate, factory operations. Communities that once sustained, and were sustained by, agricultural surroundings, are dying. Add those struck down by resource depletion and the impact of climate change, and the course is set.

The economic, social, and environmental consequences of rural out-migration are well-studied and documented. The researchers I encountered—Drs. Dave Whitson and Debra Davidson (University of Alberta), Dr. JoAnn Jaffe (University of Regina), and Dr. Roger Epp (Augustana Campus, U of A)—are just a few who have made significant contributions to an understanding of rural degeneration. Their work represents a growing body of academic investigation into a field of escalating concern.

This book, however, is neither academic in nature, nor is it about degeneration. Rather, it is a look at communities that should have died, but didn’t. Despite losing grain elevators, post offices, schools, grocery stores, and other essential services, they are thriving.

Other titles by Elizabeth McLachlan

Gone But Not Forgotten

Tales of the Disappearing Grain Elevators

Rural Teachers in the War Years

Rural Teachers of the Depression Era