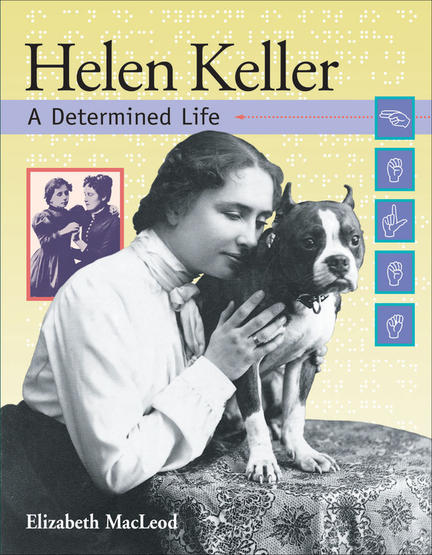 Imagine living in total silence and darkness. That's what Helen Keller's world was like after a childhood illness left her deaf and blind. Unable to express herself, she threw tantrums that earned her the nickname “Little Bronco.” But Helen's teacher Annie Sullivan found the key to communicating with her. Only then was the little girl able to experience fully the world around her. Helen went on to become the first deaf and blind college graduate in the United States and worked all her life helping to educate others about people with disabilities.

Using photographs, quotes, letters and drawings, this biography in the Snapshots: Images of People and Places in History series introduces young readers to Helen Keller. Also included are a timeline of her life and a list of places to visit to learn more about this inspirational woman.

An engaging and often poignant text, Helen Keller: A Determined Life will be enjoyed for both research and pleasure reading.

Braille and sign language opened the world and its opportunities to Helen Keller, who was deaf and blind. She accomplished multiple feats including touring as a lecturer and becoming the first deaf-blind person in the U.S. to finish college. Detailed illustrations grace nearly every page of this simply written biography.