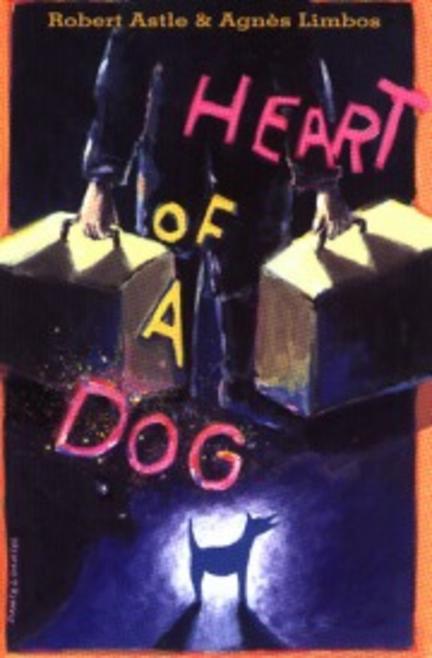 Based on Russian author Mikhail Bulgakov's scathing 1925 satire Heart of a Dog, Robert Astle's play brilliantly recreates the story of a dog's-eye view of tyranny and social injustice. First performed in Belgium, Heart of a Dog has gone on to productions across the UK, Canada and the USA, receiving rave reviews everywhere it goes. Robert Astle's radio adaption of Heart of a Dog was also heard on CBC Radio.

Robert Astle is a writer, director and teacher. His solo plays Heart of a Dog and The Hats of Mr. Zenobe have been produced and performed in Canada, the USA and Europe; the Toronto production of The Hats of Mr. Zenobe garnered him four Dora Award nominations. In the 1980s he was a member of Small Change Theatre, a company that toured clown and mask plays around the globe. He taught clown and bouffon theatre at Concordia University as well as playwriting at the National Theatre School of Canada and was the Playwright in Residence at Montreal's Centaur Theatre. He presently lives in New York.

Polygraph sits on stage right suitcase, and tests his tea water with a filthy finger. He decides it isn't hot enough and turns to look directly at the audience.

Polygraph: I tell you a story...

The lights cross-fade to a warm intimate "storytelling" light focussed on the centre area.

The story of a cook, a drop of water and a dog. Now, once upon a time, there was a dog who lived in the city of Moscow (He gestures at the samovar.) Now, it was cold, snowing, winter (Polygraph reaches into his pocket for some white confetti. He sprinkles it around the samovar, making the sound of a cold wind.) Just like that. Now, have you ever been so cold that you cannot do that? (He tries to pry apart his frozen fingers.) It was that cold. Now, that dog was starving. He had not eaten for two days. He saw a cafeteria across the street. He ran across the street. He scratched at the door (He makes scratching sounds.) Just like that...he howled... Aroooo... Just like that. Now, the door opened. A warm wind blew out. He saw a pair of white pants a cook. Now, that dog looked into the eyes of that cook...very nasty. Now, that cook was holding a bucket full of hot water. He threw the hot water at that dog... (Polygraph gets to his feet in alarm.) The dog started to run, but his feet were slipping on the icy pavement. His paws, they started to bleed. Out of the corner of his eye, he saw a little drop of water coming straight towards him. (Polygraph watches the "water" come toward him.) It caught him right there. (He touches his cheek and lets out a surprised howl.) Arooooo... Just like that. Then the rest of the water fell directly on his side. (He howls in agony.) Aroo-aroo-aroo-ooooahhhhhh... Just like that. Now, that dog crawled along the icy pavement to a gateway. He howled. Arooooo...

A shaft of bright white light cuts across centre stage. Polygraph poses tragically, remembering the pain. He gazes up into the light. His voice is very fragile.

The blizzard roars a prayer for the dying, and I howl with it... Arooooo-ooooo-ooooo... Ah people, people, a dog is hard to kill. His spirit clings to life. Aroooo-oooooo. Just like that.

Now, that dog, he started to cry, but the tears couldn't even make it to the edge of his cheek. They froze right there, in the corner of his eye and he closed his eyes and he had a dream... Just like this.

Polygraph makes wind sounds and tosses some confetti in the air. He walks into this little blizzard, and looks at the audience. The lights cross-fade to the cool blue "dream" light.

“So persuasive was Robert Astle's performance of a dog in Heart of a Dog that I found myself walking along the street outside the Poor Alex Theatre in a complete dog mind-set: entranced by dogs tied to street posts, dogs investigating garbage and each other's tails, dogs trotting along on leashes, inhaling the aromas of the sidewalk. The play, adapted freely and imaginatively by Edmonton actor Astle along with Belgians Didier Caffonnette and Agnes Limbos from Mikhail Bulgakov's 1925 allegorical satire, is an exercise in apocalyptic black humour. The piece is remarkably sure-handed: wickedly funny and political in a sophisticated sense, not by declaiming or denouncing, but by exposing the abuses of power.”

Other titles by Robert Astle

Hats of Mr. Zenobe, The