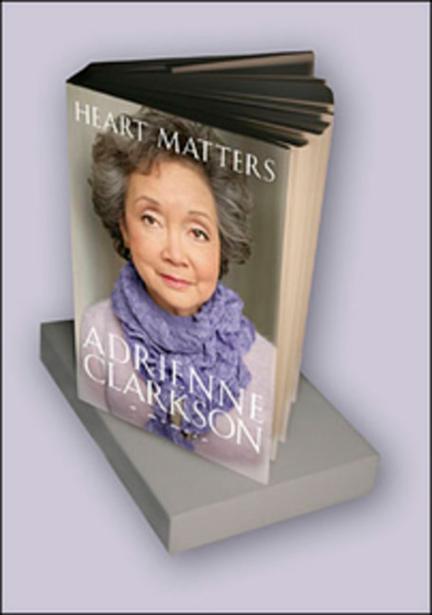 Adrienne Clarkson’s beginnings—her family escaped from Japanese-occupied Hong Kong in 1942—were a harbinger of the drama that would echo through her life. After growing up in Ottawa, and studying in Toronto and France, she launched a successful CBC television career that lasted nearly three decades.

Then in 1999, Clarkson returned to Ottawa to become Canada’s twenty-sixth Governor General—an office she transformed through her commitment, style, and compassion. Travelling thousands of kilometres to small communities in Canada and abroad, Clarkson reached out to Canadians everywhere, particularly to the North’s Aboriginal population. She also met with international figures from Queen Elizabeth to Nelson Mandela and Vladimir Putin, and hosted foreign dignitaries—including one whose entourage had to be dissuaded from sporting loaded pistols inside Rideau Hall.

Clarkson forged a unique bond with the military in her position as Commander in Chief and travelled to Kosovo, Bosnia, the Arabian Gulf, and twice to Afghanistan to visit Canadian troops. Her determination to invest meaning in all her official actions created controversy at times, whether it was refashioning Rideau Hall into a real home and showcasing it for the public, or including writers and artists on state visits. Clarkson reflects on some of the behind-the-scenes machinations with a close-up view of how politics sometimes works.

Heart Matters is more than a public life remembered. It chronicles an astonishing journey through triumph and turmoil. The always poised Clarkson reveals that life was not as smooth as it appeared, and with remarkable candour and poignancy, she reflects on the heartaches of her earlier years—her beautiful but troubled mother, the death of an infant, a divorce, and the estrangement from her two daughters and their later reunion.

Adrienne Clarkson became Canada’s twenty-sixth Governor General in 1999 and served until September 2005. She is the bestselling author of Heart Matters: A Memoir, Room For All Of Us: Surprising Stories of Loss and Transformation, and Great Canadian Lives: Norman Bethune. In her multi-faceted career as an accomplished broadcaster and distinguished public servant, she has received numerous prestigious awards and honorary degrees in Canada and abroad. In 2005, she co-founded the Institute for Canadian Citizenship. In 2006, she established the Clarkson Cup, which is now the championship trophy for the Canadian Women’s Hockey League. In 2007, she was appointed Colonel-in-Chief for Princess Patricia’s Canadian Light Infantry. A Privy Councillor and Companion of the Order of Canada, she lives in Toronto.

Other titles by Adrienne Clarkson

A Portrait of Canada’s Parliament

Adventures in Canadian Film and Television

The Paradox of Citizenship

Room for All of Us

Surprising Stories Of Loss And Transformation