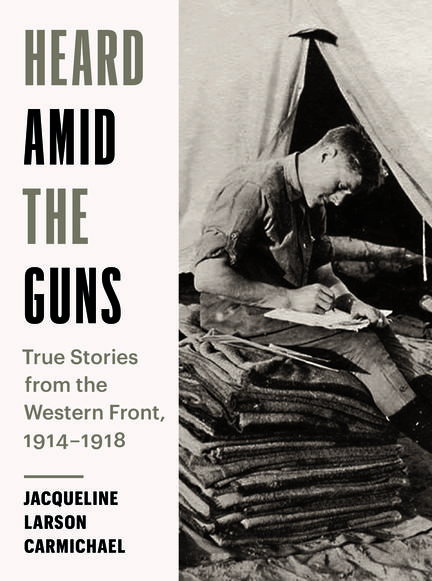 "Carmichael captures the anguish and the wonder of war in flashes of colour, humour, and gems of human detail mined from letters, diaries, interviews, [and] her own family history." —Halifax Chronicle Herald

A rich and varied tapestry of the First World War, highlighting the personal stories of over 150 men and women from across North America who served overseas.

After receiving a bundle of worn letters written by her late grandfather George “Black Jack” Vowel during the First World War, journalist Jacqueline Carmichael became fascinated with the daily realities and personal stories of those who had lived through that pivotal and harrowing period in history. Reaching beyond the battlefield descriptions found in most history books, Carmichael presents unforgettable accounts filled with drama, hope, and heartbreak culled from journals and letters of Allied soldiers and nurses.

From tales of men “shot at dawn” under charges of desertion or cowardice, to women cross-dressing to get into battle, to a Canadian Member of Parliament whose PTSD-induced death was barely acknowledged by Ottawa for nearly a century, Heard Amid the Guns reflects the human face of war. Featuring profiles of people from every Canadian province and many American states, including soldiers of Indigenous, Asian, Indo-Canadian, and African-Canadian and -American backgrounds, this book is a touching tribute illustrated throughout by WWI-era photos, postcards, documents, and the author’s contemporary photos from battlefield sites and monuments.

A former newspaper editor and publisher of Westerly News, Jacqueline Carmichael is a journalist who has written for numerous publications, including the Edmonton Sun, Dallas Morning News, Entrepreneur Magazine, Dallas Child Magazine, and National Public Radio. She is a recipient of the Texas Associated Press Managing Editors award for feature series writing. Her first book, Tweets from the Trenches, was shortlisted for a Whistler Independent Book Award.

"Heard Amid the Guns is a compelling work of remembrance. The stories—often drawn from letters and diary entries of soldiers, nurses, and family remaining on the home front—collectively capture the stark reality of the First World War." —Mark Zuehlke, author of the 14-volume Canadian Battle Series and winner of the Governor General's Pierre Berton Award for Popular History

"A wide-ranging, interesting, and at times intimate primer on the Great War from its beginning to the end, the Armistice and the aftermath." —Susan Raby-Dunne, author of Morrison: The Long-Lost Memoir of Canada's Artillery Commander in the Great War and John McCrae: Beyond Flanders Fields