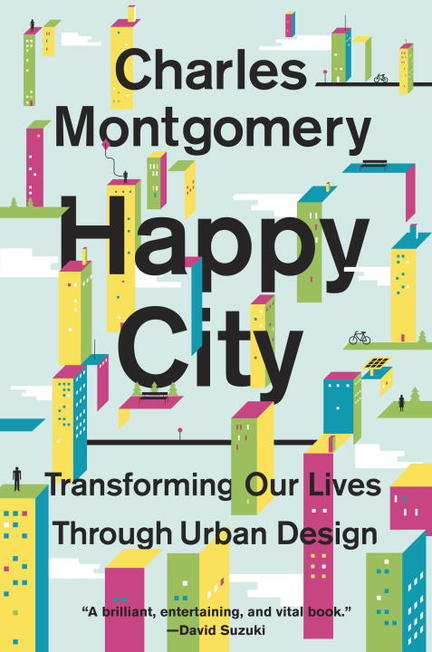 Charles Montgomery’s Happy City will revolutionize the way we think about urban life.
After decades of unchecked sprawl, more people than ever are moving back to the city. Dense urban living has been prescribed as a panacea for the environmental and resource crises of our time. But is it better or worse for our happiness? Are subways, sidewalks and condo towers an improvement on the car-dependence of sprawl?
The award-winning journalist Charles Montgomery finds answers to such questions at the intersection between urban design and the emerging science of happiness, during an exhilarating journey through some of the world’s most dynamic cities. He meets the visionary mayor who introduced a “sexy” bus to ease status anxiety in Bogotá; the architect who brought the lessons of medieval Tuscan hill towns to modern-day New York City; the activist who turned Paris’s urban freeways into beaches; and an army of American suburbanites who have hacked the design of their own streets and neighborhoods.
Rich with new insights from psychology, neuroscience and Montgomery’s own urban experiments, Happy City reveals how our cities can shape our thoughts as well as our behavior. The message is as surprising as it is hopeful: by retrofitting cities and our own lives for happiness, we can tackle the urgent challenges of our age. The happy city can save the world--and all of us can help build it.

Charles Montgomery was born in 1968. He spent his formative years on a farm in North Cowichan, Vancouver Island. He has been a writer and photojournalist since 1996. His interest in people, landscape, science and myth have led him to stories on four continents. Charles has followed leads to Nunavut, the United Kingdom, Ireland, Thailand, Laos, Hong Kong, Japan, Peru, Fiji, Colombia, Vanuatu and the Solomon Islands.

Finalist for the Hilary Weston Writers’ Trust Prize for Nonfiction

"Such an instructive book." —Toronto Star "Montgomery is a talented raconteur. . . . In Happy City, the prose swings when he’s plunging us into the moment."
—National Post

"Montgomery should be praised for both the breadth of his research as well the virtues of most everything he argues."
—The Globe and Mail

"A copy of Charles Montgomery’s Happy City sits on newly elected Toronto mayor John Tory's desk. Here’s hoping he and every major reads it. The book is a builder’s guide to a modern and livable urban environment. . . . [containing] Malcolm Gladwell-worthy data mining."
—John Moore of Moore in the Mornings (via National Post)

“Lively and accessible. . . . In Montgomery’s hands, urban design proves not only exciting, but integral to our future.”
?Publishers Weekly

“Happy City is not only readable but stimulating. It raises issues most of us have avoided for too long. Do we live in neighbourhoods that make us happy? That is not a silly question. Montgomery encourages us to ask it without embarrassment, and to think intelligently about the answer.”
—The New York Times

“A brilliant, entertaining and vital book. Montgomery deftly leads us from our misplaced focus on money, cars and stuff to consider what makes us truly happy. Then everything changes - the way we live, work and play in humanity's major habitat, the city.”
—David Suzuki

“The place we live is key to our happiness. Charles Montgomery helps us understand why and provides a guidebook for living a happier, more fulfilling and meaningful life.”
—Richard Florida, University of Toronto and NYU professor and author of The Rise of the Creative Class.

Other titles by Charles Montgomery

Encounters with Ghosts and Ancestors in Melanesia

BC National Award for Non-Fiction Longlist

Talking With Dan Rubinstein About Born to Walk

On great non-fiction, pedestrian surprises, and the perils of reading while walking.