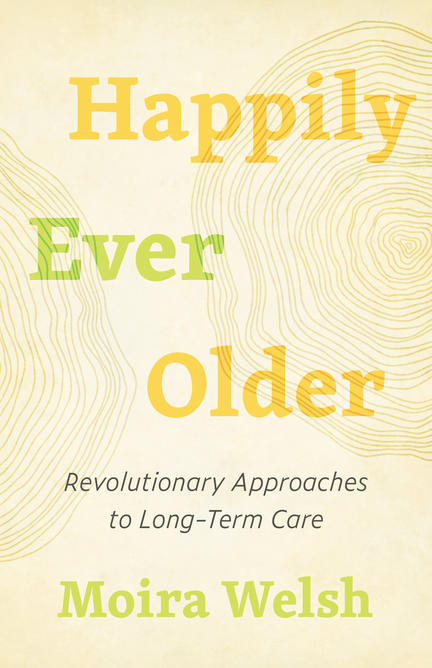 While Being Mortal (Atul Gawande) helped us understand disease and death, and Successful Aging (Daniel J. Levitin) showed us older years can be a time of joy and resilience, Happily Ever Older reveals how the right living arrangements can create a vibrancy that defies age or ability.

Reporter Moira Welsh has spent years investigating retirement homes and long-term care facilities and wants to tell the dangerous stories. Not the accounts of falls or bedsores or overmedication, but of seniors living with purpose and energy and love. Stories that could change the status quo.

Welsh takes readers across North America and into Europe on a whirlwind tour of facilities with novel approaches to community living, including a day program in a fake town out of the 1950s, a residence where seniors school their student roommates in beer pong, and an aging-in-place community in a forest where everyone seems to have a pet or a garden or both. The COVID-19 pandemic cruelly showed us that social isolation is debilitating, and Welsh tells stories of elders living with friendship, new and old, in their later years.

Happily Ever Older is a warm, inspiring blueprint for change, proof that instead of warehousing seniors, we can create a future with strong social connections and a reason to go on living.

Moira Welsh is an investigative journalist with the Toronto Star, Moira has co-authored investigations that have won three National Newspaper Awards and a Michener Award for Public Service Journalism. She was a finalist for the Justicia Award for Legal Reporting and the Canadian Hillman Prize. She started as a breaking news reporter and soon joined the investigative team where she has written on social justice, the environment, and the lives of people living in seniors’ homes. Moira lives in Toronto, Ontario, with her family.

I write this in the middle of a pandemic.

There is much that we don’t know. Scientists are racing to create a vaccine. Immunity from a second round of COVID-19 is unclear. The virus’s timeline in our lives remains a mystery, although public health officials say it could last a few years.

Here is what we do know.

When COVID-19 landed in North America, we had already witnessed its death march through seniors’ homes in Italy, Spain and France, killing thousands — retired teachers, accountants, electricians and bakers. The parents and grandparents of Europe.

We knew that elders, winners in the lottery of long life, were vulnerable.

When the virus arrived, in cities large and small, nursing-home deaths surged and soon, New York, Chicago and Los Angeles became COVID-19 hotbeds. In Ontario and Quebec, infections decimated long-term care, but not before a young geriatrician tweeted a warning: seniors’ homes will blow up like a tinderbox.

Dr. Samir Sinha was right. So were countless others, from AARP, the influential advocacy organization for older adults, to the Registered Nurses’ Association of Ontario, all telling governments to focus on COVID-19 in nursing and retirement homes. Give all staff masks, test everyone, not just those with symptoms because, as we soon learned, the telltale signs in older people were as innocuous as an upset stomach or nothing at all. The virus used stealth.

Those were the infection control actions, but the bigger crisis, the spark to the tinder that Dr. Sinha cited on Twitter, was the system that controls seniors’ homes. For decades, long-term care has operated on a tight budget, draining the life pleasure of the people who reside within while devaluing the work of staff, forcing many to work in two or three locations just to make a living wage. This is how a virus spreads from one home to the next.

As I write this in June 2020, we still don’t know how many elders will die.

We do know that the coronavirus-related deaths of older people are forcing the industry and politicians to confront reality, even though it was there to see all along. Going into the pandemic, governments mostly viewed nursing homes as a second-tier system for residents whose frailties were similar to those in acute care hospitals.

It remains to be seen if these flaws laid bare will lead to improvements, but the suffering will not soon be forgotten. Families were banned from visiting, a policy meant to keep residents safe, even though workers unintentionally brought COVID-19 inside, infecting the people in their care. Without proper protections, the virus spread. As weeks passed, and staff grew sick or terrified, families realized that parents and grandparents were dying, alone.

There will be a generation of adult children who live with the trauma of knowing their mother or father spent the final moments of life with no one to hold a hand or speak quiet words of love. As a journalist with the Toronto Star newspaper, I have spent the pandemic writing about seniors’ homes, speaking to families that were emotionally destroyed. People who had the means

“A timely addition to the literature on aging … There is a lot of hope in this blueprint for change. Recommended for public libraries and especially medical libraries.” — Library Journal

“Every single person in this country needs to read this book. Moira Welsh has somehow managed to give hope to something that for the most part seems hopeless. I actually laughed out loud a few times because I was relieved to know that there were people working on some incredible solutions to make getting older easier and more dignified.” — Jann Arden, singer-songwriter, actor, and bestselling author of Feeding My Mother: Comfort and Laughter in the Kitchen as My Mom Lives with Memory Loss

“Moira Welsh shows us what’s possible when we think outside of the box, push beyond the status quo and let ourselves imagine. This is not a book of doom and gloom about growing older and needing support; it’s about hope and inspiration. We need to share this book far and wide as we all are growing older and we are the best advocates for ourselves and those living in care communities. It’s true — we can be happily ever older!” — Penny Cook, president and CEO of the Pioneer Network

“With a journalist’s eye and a storyteller’s heart, Moira Welsh crosses the continent and beyond, sharing tales of visionaries who are seeking to enrich the experience of aging in our world. Informative and inspiring!” — G. Allen Power, MD, FACP, geriatrician, educator, author, Schlegel Chair in Aging and Dementia Innovation

“Happily Ever Older is a delight. Moira Welsh brings a steady drumbeat of humanity to so many stories woven into the global examples of attempts to create environments that focus on individualized care, relationship-based models of care, the emotional intelligence of the staff, normalization of architecture and community integration … and so much more.” — Susan Reinhard, RN, PhD, FAAN, senior vice-president at AARP, director of the AARP Public Policy Institute, and chief strategist at the Center to Champion Nursing in America

Books about Aging and Compassion in Longterm Care

On Aging and Eldercare