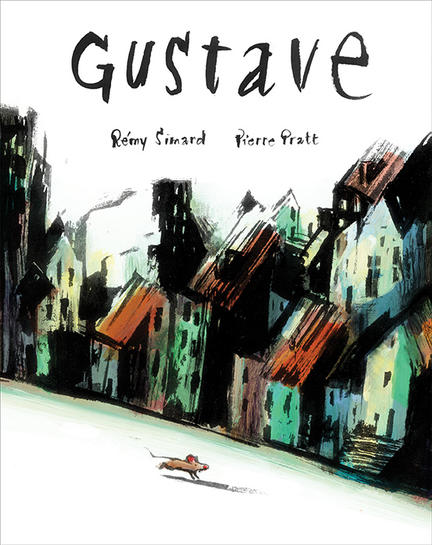 A little mouse and his friend, Gustave, go out to play one afternoon in this darkly comic story about the sadness of losing a friend and the joy of making a new one.

The mouse’s mother has always warned the young friends not to stray too far from home. There is a cat, she says, and it is dangerous to go far away.

But danger doesn’t stop this curious pair, and soon they find themselves face-to-face with their big blue-eyed enemy. In a feat of bravery, Gustave allows his friend the chance to escape — but is gobbled up by the cat in the process. Heartbroken, the little mouse must return home — without his friend — and tell his mother what has happened.

A sweet surprise ending turns this melancholy tale of friendship into a strangely funny book.

Rémy Simard has illustrated many books for children. He is also the author of a series of graphic novels which is being adapted for television. Rémy has been shortlisted for a Governor General’s Award and is well known and regarded for his comic style. He lives in Montreal, Quebec.

A darkly comic story. . . . Gustave is a marvellous marriage of text and illustration.

No artificial sweeteners here: the fear is real, but so is Mommy’s ability to make things better . . . at least for now.

Some readers, taking a longer view, will find Simard’s parody of a child’s sense of crisis downright funny.

Other titles by Remy Simard

Simone: The Best Monster Ever!

Other titles by Pierre Pratt

Old Man and the Penguin, The

A True Story of True Friendship

One Is a Lot (Except When It's Not)

Doors in the Air Read-Along