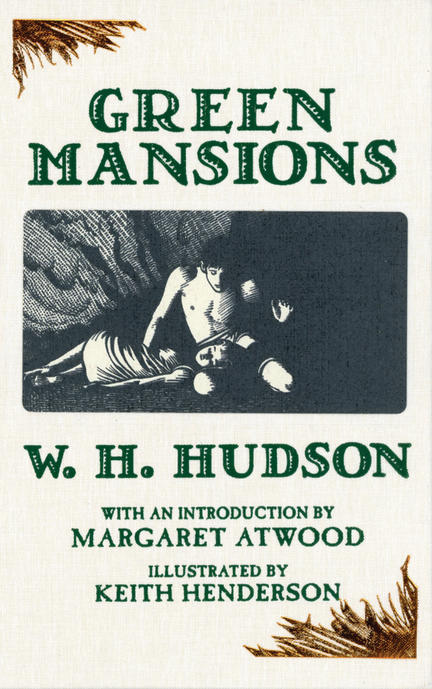 After a failed revolution, Abel is forced to seek refuge in the virgin forests of southwestern Venezuela. There, in his “green mansion”, Abel meets the wood-nymph Rima, the last of a reclusive aboriginal race. The bird-girl’s ethereal presence captivates him completely, but the love that blossoms is soon darkened by cruelty and sorrow. Exploring a love somewhere between reality and imagination, Green Mansions is a poignant meditation on the loss of wilderness, the dream of a return to nature and the bitter reality of the encounter between savage and civilized man.

A master of natural history writing, W.H. Hudson forms a link between nineteenth-century Romanticism and the twentieth-century ecological movement. First published in 1904, Green Mansions owes much of its success to the mystic, near-religious feelings that pervade the story. Hudson’s halting, poetic expressions combined with his descriptions of untouched, natural beauty makes Green Mansions as powerful call back to nature today as it was one hundred years ago.

Keith Henderson has published five other novels with DC Books, The Restoration (1992), The Beekeeper (1990), The Roof Walkers (2013), Acqua Sacra (2016), and Sasquatch and the Green Sash (2018), political essays from when he was Quebec correspondent for the Financial Post (Staying Canadian,1997), as well as a prize-winning book of short stories, The Pagan Nuptials of Julia, 2006). He led the Equality Party during the separatist referendum of 1995, taught Canadian Literature at Vanier College for many years, has sat on numerous boards in Anglo-Quebec including ELAN and the AELAQ, and is currently President of The Special Committee for Canadian Unity. He is completing a critical autobiography with special focus on the works of Edith Wharton.

Other titles by Keith Henderson

Sasquatch and the Green Sash

The Pagan Nuptials of Julia and Other Stories

the Struggle against UDI