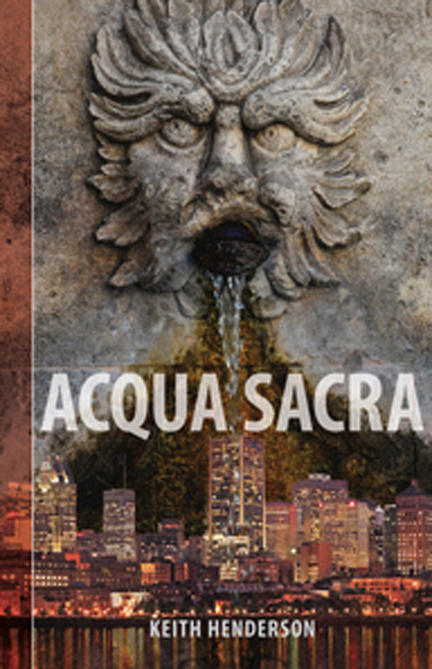 Everything seems broken in Suzanna Ricci's life. Only 42, her marriage to Len has disintegrated. Her relationship to their teenage boys, Robin and Logan, is in need of repair. Now her mother, 'that martial soul,' wants her to restore the family home in Acqua Sacra, damaged by earthquake. And she doesn't care how many trips from Montreal to their vivid Italianpatriaof Abruzzo her daughter has to make.
At least when Len, a dodgy accountant, encourages her to take a job with a Montreal law firm headed by a man named Robert Bliss, Suzanna feels hopeful of being freer of her ex. Until she realizes the crazy cost of disentangling herself, and not just from him or his 'associates.'
Henderson, the author of The Roof Walkers, again delivers an entertaining and perceptive story in Acqua Sacra about the nature of personal responsibility, this time in an age of multinational delinquency. If Suzanna survives the wreckage, it'll be by honouring the true meaning of 'family' in any global village.

Keith Henderson has published five other novels with DC Books, The Restoration (1992), The Beekeeper (1990), The Roof Walkers (2013), Acqua Sacra (2016), and Sasquatch and the Green Sash (2018), political essays from when he was Quebec correspondent for the Financial Post (Staying Canadian,1997), as well as a prize-winning book of short stories, The Pagan Nuptials of Julia, 2006). He led the Equality Party during the separatist referendum of 1995, taught Canadian Literature at Vanier College for many years, has sat on numerous boards in Anglo-Quebec including ELAN and the AELAQ, and is currently President of The Special Committee for Canadian Unity. He is completing a critical autobiography with special focus on the works of Edith Wharton.

“Thanks to a bizarre scene in which Suzanna is knocked unconscious by a sheep in Italy, the heroine may strike the reader as a metaphor for a world that’s had the wool pulled over its eyes, but, despite itself, is starting to see. Alluding to Psalm 51:8, she muses that things are undoubtedly broken ‘so that they may rejoice, probably in the mending, that small, humble fixing and repair people everywhere had to care about.’ Ultimately, Suzanna’s struggle and apparent misfortune serve as catalysts for new levels of awareness and growth, suggesting that things sometimes need to fall apart before they can be built back up, stronger than before.”

“Acqua Sacra is a compelling book, dealing with both personal and family issues, and more broadly political and commercial issues. Keith Henderson has created a pacey narrative written in the style of a good thriller, which takes in the harrowing effects of divorce, the feelings of failure and their effects on the family, along with Mafia involvement in the Canadian construction industry and all levels of Italian politics and commerce. It deals with corruption at every level and the difficulties of being an honest, caring individual in a world seemingly rotten to the core. An interesting, though sometimes worrying book for anyone who cares about our planet. I thoroughly enjoyed Acqua Sacra and do not hesitate to recommend it.”

“With Canada celebrating its 150th anniversary, many Canadians are thinking about what it means to be Canadian. Keith Henderson, MA (Eng.) 86, is certainly no exception. From 1993 to 2003 he led the now-defunct Equality Party, a Quebec provincial political party that represented anglophones. His career as a writer has likewise given him opportunity to reflect on Canadian national identity. Identity inevitably comes up in his latest novel, Acqua Sacra (DC Books, $21.95), a story of a woman who is torn between her floundering life in Montreal and her mother's demand to rehabilitate the family home in Italy. An earlier novel, newly relevant in light of Canada's sesquicentennial, explores the Fenian raids in the lead up to Confederation. The Roof Walkers (DC Books, $21.95) takes the form of official reports from a young Irish-Canadian spy operating in the 1860s. Henderson lives in Montreal, where he taught English for many years.”

“In Acqua Sacra, we find ourselves in a somewhat uncomfortable position, work suspended in the house, a confrontation with the mother of the workers supposed to finish the job. But in exchange for prosecutorial immunity, Susanna becomes involved in a Canadian operation far beyond the scope of normalcy. Her unease about her situation is made clear in a precise psychological portrait Keith Henderson renders perfectly in a series of metaphors that act as a summary of Susanna Ricci’s self-assessment: her distaste for roller coasters, her vertigo at heights, her love of quiet, unhurried driving, her refusal to learn to ski. The final portions of the book intensify the shift toward crime novel. And here both the fantasy and reality of our times combine in situations that lend an entirely different and enriching flavour to so lively a book…. Truly a fine novel.”

Other titles by Keith Henderson

Sasquatch and the Green Sash

The Pagan Nuptials of Julia and Other Stories

the Struggle against UDI