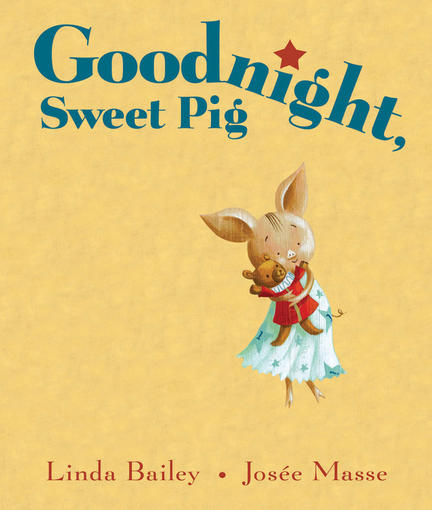 Poor pig number one may never get to sleep! In this swine-stuffed count-along bedtime book, one ham-bunctious pig after another comes crowding into her bedroom --- each with its own special way to keep the poor little pig awake. Pig number two turns on the light. Pig number three likes to watch TV all night. Four's a juggling boar --- and there are still six more! With new hogs arriving by the minute, pig number one's bedroom is wall-to-wall pig-demonium. Will this weary little pig ever hear the Bard's immortal words: “Goodnight, sweet pig”?

Here is a counting book that uses irresistible rhymes to send children off to sleep, night after night.

Josée Masse grew up in Montreal, where she painted with her father in his studio as long ago as she can remember. After college, she worked as a graphic designer for a few years, before deciding to become a full-time illustrator. Josée now lives near Montreal in the country with her partner and their daughter.

This is a well-done go-to-sleep book ...

The story is told in a simple rhyme ... The illustrations are bright and humorous ... Goodnight Sweet Pig would not only help small children learn their numbers but would also make an excellent bedtime story for restless children.

Little pig number one can’t sleep due to unwanted swine in her bedroom. She puts her trotter down and asks the intruders to leave. This bedtime counting book contains naturally flowing rhyming text and multiple Shakespeare references. Lively and vivid acrylic artwork accompanies this charming tale.

Other titles by Josée Masse

The Best Summer Ever

Party at the Pond