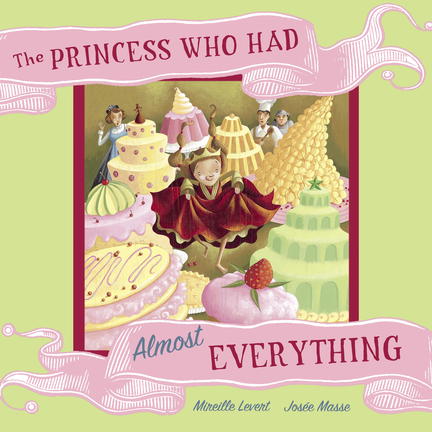 Princess Alicia has everything she needs and more. A splendid castle, mountains of desserts, and loving parents who do everything possible to ensure she is happy. But even with all of that, Alicia is bored. Terribly bored. So what will it take to finally make her happy?

The Princess Who Had Almost Everything is an enchanting tale that reminds readers of all ages that happiness is not always where you seek it, but instead can be found in the most unlikeliest places.

Mireille Levert is one of Quebec’s most talented children’s book author-illustrators. Her previous books include Lucy’s Secret, Rose by Night and Tulip and Lupin Forever, and she has won Governor General’s awards for Island in the Soup and Sleep Tight, Mrs. Ming. Mireille lives in Montreal where she works as an illustrator.

Josée Masse grew up in Montreal, where she painted with her father in his studio as long ago as she can remember. After college, she worked as a graphic designer for a few years, before deciding to become a full-time illustrator. Josée now lives near Montreal in the country with her partner and their daughter.

Princess Alicia has everything: her own castle with a roller coaster, a maze with its own train, all the shoes and all the desserts her heart desires. But no matter how she is entertained she still cries: “I’m bored!” Using traditional fairy tale tropes of repetition and exaggeration, Mireille Levert presents a new fairy tale reminiscent of the classics: a petulant princess, a search for a prince, and finally the perfect, surprising gift that opens her eyes and heart.

Like the text’s combination of new and old, Josée Masse’s illustrations are a mix of old and new in the vein of traditional fairy tale art. Blue and white silhouettes begin and end the tale, reminiscent of Arthur Rackham’s black and white silhouettes. The majority of illustrations are rendered in scrumptious pastel colours and employ interesting perspectives to convey the scope of Princess Alicia’s “everything.”

This picture book is sure to be relished by those who are familiar with the fairy tale genre and those just being introduced to it, complete with gentle fairy tale moral, delicate illustrations, and magical language.

Princess Alicia has everything she needs and more, but she is terribly bored. What will it take to make her happy? This enchanting tale reminds readers that happiness is not always where they seek it, but instead can be found in the most unlikely places.

Other titles by Mireille Levert

Down at the Sea Hotel

Tina and the Penguin

Island in the Soup /tp

Other titles by Josée Masse

The Best Summer Ever

Party at the Pond