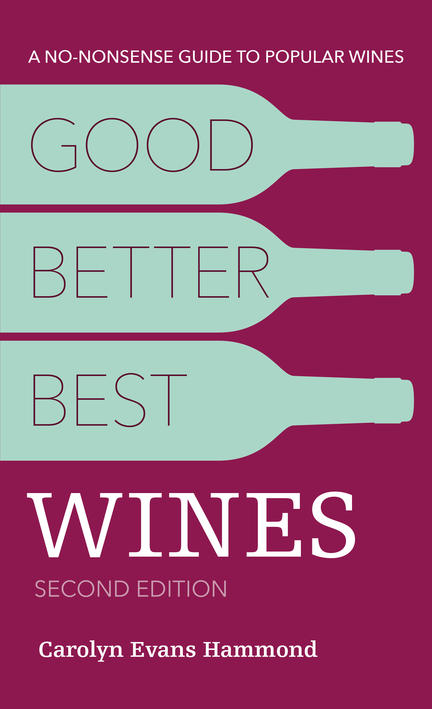 Drink up this snobbery-free guide to quickly finding which wines are worth your money.

Buying a popular wine should be simple, not pretentious and expensive. In this completely revised second edition, wine expert Carolyn Evans Hammond compares the bestselling wines in North America by price (up to $15) in many wine styles, including Chardonnay, Pinot Grigio, Sauvignon Blanc, Cabernet Sauvignon, Merlot, and Pinot Noir. The listings reveal the distinct smell, flavor, and texture for each wine as well as the alcohol content by volume to help you choose the right wine for you.

Whether you’re rushing to find the right wine for a summertime backyard BBQ, New Year’s Eve celebration, or a dinner party or you’re planning the wine choices for an upcoming wedding or other fancy soirée, this book gives you everything you need to know to make the perfect selection. Every bottle or box of wine is shown in vivid color, and because this guide is also small enough to pop in your pocket and take with you anywhere, you can easily find the wines that suit whatever occasion calls for wine. In this way, this book can also help you look like a wine expert at any event you host. You’ll never make a bad wine choice again and you’ll never spend more than you want—all thanks to this guide and Carolyn’s extraordinary wine knowledge.

“They’re big, they’re out there, but they’re not all the same. This book cuts a sure course through the ocean of popular wines. Carolyn’s enthusiasm and stylistic panache tells you what you need to know—and fast.” — Andrew Jefford, columnist for Decanter and chairman of the 2018 Decanter World Wine Awards

Carolyn Evans Hammond is a two-time bestselling wine book author, the wine columnist for the Toronto Star (syndicated), and a seasoned wine judge.

Over the past 15 years, she has appeared on CNN International, BON TV (China), GoingGlobalTV.com, Canada AM, and CITY-TV; she has been a guest on radio stations all over the United States; and she has written for top publications, including Decanter, Wine Spectator, Wine & Spirit International, The Times (London), Maclean's, Quench, Taste magazine, and others.

Constantly learning, Carolyn spends much of her time tasting wine, judging wine, and meeting with winemakers to keep abreast of the industry. She's a longstanding member of the Circle of Wine Writers, holds a diploma from the Wine & Spirit Education Trust in the UK, and earned a BA from York University, where she studied English and philosophy. She has lived in many cities in North America and Europe and now resides in Toronto, where she was born.

Her message is simple: Living well doesn't have to be pricey or pretentious. It just takes a little know-how—and maybe a corkscrew.

Introduction
If anyone can wobble into verbose, irrelevant, wayward, noun-strewn-as-adjective criticism, it’s a wine writer. I know. It’s my profession. But who cares if the grapes were handpicked by Jean-Paul with the blue beret and his three sons before being thrice sorted, pneumatically pressed, fermented with wild yeasts, aged in large old oak barrels, and blended with 2.4% Sémillon to enhance the mouthfeel? Or that the vines grew in soil rich in calcareous Kimmeridgian clay and Jean-Paul’s wife Martine once drank the 1967 vintage with Pierre Bardot, fifth cousin of Brigitte Bardot?

What does the wine taste like? Is it a good price? And is it available at the wine shop or supermarket down the street? That’s what matters, especially when you’re looking for a great-tasting, five- or ten-buck bottle to enjoy midweek. Sure, a little story is a great conversation starter, but talk of wine can quickly dwindle into mind-parchingly dry drivel about vineyard location, vintage quality, and the tepid tedium of winemaking techniques, such as malolactic fermentation, micro-oxygenation, and filtration.

With this book and the style of wines reviewed in its pages, I’m putting my foot down. Slamming my fist on the table and giving you the stuff that matters. The dirt. The goods. The short, sweet, critical information on what the wine tastes like so you can get on with drinking. I sample, you sip. Deal?

Thus, I’ve tasted the best-selling brands in the United States. These are brands you know, bottles you recognize, and names you trust to make wines that suit you and everyone you know.

And I’m not pulling these brands from thin air. Each year, a respected market research company called the Beverage Information Group publishes the Wine Handbook, which includes a ranking of the top 120 wine brands based on volumes sold across the United States. I’ve based this book on those brands in the 2017 Wine Handbook rankings. Additionally, a few PR people persuaded me to include names outside the top 120 by nearly breaking into arias about the greatness of certain bottles, then anchoring their enthusiasm with compelling information to show that these wines are popular and widely available. So I also tasted these bottles on your behalf.

Just how popular are the brands in this book? The top brand sold the equivalent of 284 million regular-sized bottles in 2016, and most brands represented here sold no fewer than about 5 million bottles in the same 12-month period. These aren’t wines people buy, say “meh,” and don’t buy again. They’re repeat purchases. The numbers bear that out. Plus, the wines aren’t just stocked at a handful of out-of-the-way wine boutiques; they’re the most widely available bottles in the United States. And most of the wines in this book are also available in other major markets.

So what I’ve done with this guide is compare grapes to grapes. All the $5–$7.99 Chardonnays were tasted side by side to determine which ones are best, as were the $8–$10.99s and the $11–$15 offerings. For this book, $15 is the cutoff because volumes drop considerably beyond that price. Most wines that cost more than $15 are generally made in smaller amounts, aren’t as widely stocked, and thus aren’t relevant to these pages.

This book also offers a cross-section of the most popular varieties sold in the United States—the Chardonnays, Pinot Grigios, Sauvignon Blancs, Merlots, Cabernet Sauvignons, and so forth—with a chapter devoted to each. To cover some other interesting stuff, a couple catchall chapters called “Other Great Whites” and “Other Great Reds” were added. And to account for the usually terrible but sometimes quite drinkable wine that costs less than $5 per bottle—or the equivalent value in boxed form—I’ve tacked on a chapter called “Good Deals at Super-Low Prices.”

I might add that Americans drink more domestic wine than imported, so the regional cross-section of wines here follows suit. A bit of Argentinean, Australian, Chilean, German, Italian, New Zealand, and Spanish wine is included, but there’s a whole lot of great-value American stuff.

This book not only recommends the good, better, and best wines in every significant category—with bottle images to help you find them on shelves—but it also slips in other interesting bits of information, including food pairing suggestions, best serving temperatures, and factoids for conversation fodder.

A useful guide to popular wines is necessary given that Americans now drink more wine than any other nation, topping 4.24 billion 750ml bottles in 2016. And the majority of the wines Americans drink are popular big brands that sell for less than $15 per bottle. It makes sense: Although thousands of wines exist, big brands like Bogle, Cavit, Concha y Toro, and Kendall-Jackson deliver great value for the money. They taste pretty much the same year to year, they’re widely available, and they sport clear and recognizable labels. And, of course, they’re made to appeal to the many rather than the few, so wine drinkers can count on them to not let them down.

While wine snobs with raised pinkies are buying, swirling, and sniffing the wines that cost two arms and a leg per bottle and are tediously hard to find, the rest of Americans are just drinking wine. Popular wine. Big-brand wine. Ironically, a disproportionate amount of wine writing focuses on big-ticket, small-scale wines in infinite detail, but no book had ever focused on ranking popular big brands—until the first edition of this book hit shelves in 2010.

One reason little ink is spilled on big brands is that there’s a stigma attached to them. Among wine critics and connoisseurs, they’re often seen as less interesting. Too commercial. Too generic. Too industrial—as if quantity has an inverse relationship with quality, which, of course, it doesn’t. Uninspiring wines are made by big and small producers, but this stigma persists.

Among some wine critics, it’s even believed that big brands are simply a means for driving shareholder value, leading to marketing that overpromises and bottles that underdeliver. Although this is sometimes the case, it’s certainly not always true. It makes better business sense to do the opposite: Use economies of scale to make wines that overperform at each price point and then encourage awareness with honest marketing.

Sure, big brands use economies of scale to muscle into the market, and it tugs at the heart to watch cold, hard market forces squeeze out smaller winemakers. With little money to toss toward marketing, merchandising, and advertising and without the quantities of wine or dollars needed to secure wide distribution, the little guy loses and the big guy wins—simple as that. It’s especially difficult for wine critics to watch this happen when we spend time visiting smaller winemakers, seeing the dirt under their fingernails, feeling the grip of passion behind their words, and appreciating their daily struggles with those gnarled vines to produce wines of beauty, place, and often pedigree.

On some level, it’s hard not to fall in love with these producers when they charm you with their honest lifestyle, take you into their homes, cook you meals, and court you with their most treasured wines lovingly drawn from their cellars. But the people behind the big brands also work hard, and their wines couldn’t be successful without consumer consent—without making wine that people like to drink, can find on shelves, and count on for pleasure. Big brands are there to turn to as reliable, go-to wines for Wednesday’s pasta, Friday’s hamburgers, or that upcoming wedding reception for 100 of your closest friends and family.

The trouble is, with upward of 20 big-brand $8 Chardonnays on the shelf side by side, it’s hard to know which one to choose. You certainly can’t taste or even smell them all before you buy, and there aren’t many scratch-and-sniff labels. So I’ve taken a good, hard look at—and taste of—the most popular wines in the United States, squirreled out the best in each style and price category, and independently published the results here in this book. For the second time.

Therein lies the purpose of this book. I hope you find it useful.

“Carolyn Evans Hammond has crafted the second edition of her wine book, Good, Better, Best Wines, which should be essential reading for those who care about the fermented grape—and, more importantly, those who care about getting the best value for the buck. Apart from her intelligent analysis of wine in layman’s terms, Carolyn offers tips and quirky side trips into the weird and wonderful world of wine.”
— Tony Aspler, award-winning wine columnist

“This is an essential book for anyone seeking great value on the wine shelf. If you’re looking to discover new wines, along with some handy tips and advice, this is an essential guide. Carolyn’s picks are right on the money (pun intended), and she makes shopping for wine easy and fun.”
— Dick Snyder, wine writer for Drink Toronto

“Carolyn Hammond has written a beautifully concise and easy to understand review of the 120 top wines sold in the United States. Without being verbose, her descriptions are a pleasure to read, with honest charm yet straight to the point and not hidden behind florid and pretentious language. Her book is well organized by grape variety into three comparative price points up to $15 per bottle and should now be considered a must when buying the big-name and popular brands that sell the most. An indispensable wine bible!”
— Fred Lamprecht, sommelier and president Lamprecht International