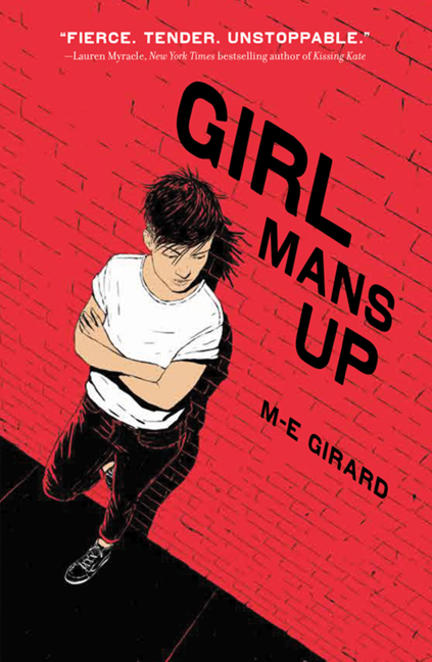 All Pen wants is to be the kind of girl she’s always been. So why does everyone have a problem with it? They think the way she looks and acts means she’s trying to be a boy-that she should quit trying to be something she’s not. If she dresses like a girl, and does what her folks want, it will show respect. If she takes orders and does what her friend Colby wants, it will show her loyalty. But respect and loyalty, Pen discovers, are empty words. Old-world parents, disintegrating friendships, and strong feelings for other girls drive Pen to see the truth-that in order to be who she truly wants to be, she’ll have to man up.

M-E Girard’s debut, GIRL MANS UP, won the Lambda Literary Award and was a finalist for the William C. Morris Award. She lives just outside of Toronto, Canada, where she splits her time between writing YA fiction, being a mom to a toddler, and working as a registered nurse. M-E dedicated the bulk of her nursing career to working with special-needs kids, and more recently, she was an ER and ICU nurse during the first waves of the pandemic. A 2013 and 2015 Lambda Literary Fellow, M-E is a proud feminist who is endlessly fascinated with what it means to be a girl—especially a queer, fat girl. You can find her online at www.megirard.com.

“Girl Mans Up makes the reader question things that we, as a society, take for granted. One such example is the idea that children owe their parents respect. While undoubtedly true, don’t parents owe their children the same? That the author effortlessly inspires such reflection is nothing short of remarkable.”

“A strong genderqueer lesbian character, imperfect, independent, and deserving of every cheer.”

“Girard’s novel is compulsively readable, by turns wrenching and euphoric. Pen is an inspiration to anyone who’s struggled to be understood, and a vital addition to the growing world of genderqueer protagonists.”

“An unassuming coming-of-age story about gender and sexuality that barely mentions labels, has no agenda and takes unexpected but genuine turns. It’s also a universal story because we’re all striving for the place where we can confidently say, as Pen does, ‘I don’t feel wrong inside myself.’”

“This is a fresh title in the growing sea of LGBTQ YA literature. ... There is no sugarcoating in this very real portrayal of an aspect of teen life that many experience.”

Books that have been winning judge and jury hearts.