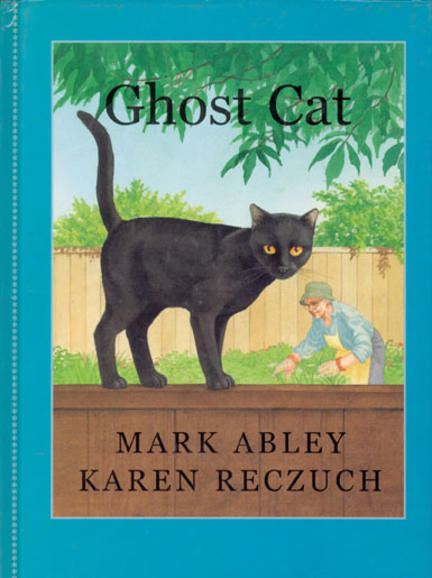 Miss Wilkinson lives with her beloved cat Tommy Douglas, whose eyes glow with brilliant orange fire. Her life is busy and active, and Tommy Douglas's companionship fills her with joy.

But Tommy Douglas is seventeen, and eventually he becomes ill and dies in Miss Wilkinson's arms. She buries him in the garden and plants a rose bush on his grave. She tries to go on with her life, but her grief and loneliness drain the pleasure from her activities.

Then one night, when she has reached a very low point, Tommy Douglas makes himself known to her. Ghost Cat is a tender and moving story of love and resilience.

Mark Abley was born in Leamington Spa, England, in 1955. From age six to twenty he lived in Lethbridge and Saskatoon. After winning a Bachelor of Arts degree from the University of Saskatchewan, he went to Oxford on a Rhodes scholarship and received his Master of Arts degree in English Language and Literature. He and his wife live in Montreal.

For the past seven years, Mark Abley has been a contributing editor to Macleans's and a regular writer for Saturday Night, CBC Radio's "Ideas" and The Times Literary Supplement. He has also written for the Globe and Mail, Canadian Literature, The Listener, and the New Statesman.

...the story will resonate with with readers who have lost and animal friend.

...helps explain the feelings of loss, grief and loneliness...poignantly with great compassion.

...a deceptively powerful story about an elderly woman and her elderly cat...

...Ghost Cat is an inspiring story that will help both children and adults deal with the loss of a loved one, whether animal or human.

Other titles by Mark Abley

Fugues, Fatherhood, and a Fragile Mind

What Our Everyday Sayings and Idioms Figuratively Mean

The Tongues of Earth

Conversations with a Dead Man

The Legacy of Duncan Campbell Scott

A Woman Clothed in Words

Digging for the Origins of Words

Dispatches from the Future of English

A Childhood Tale of Laura Secord