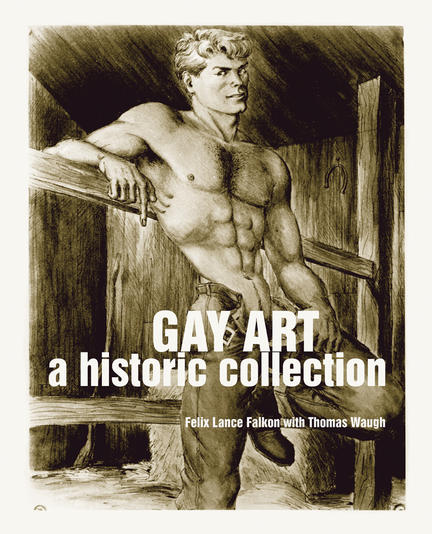 This new edition has been updated by the original author, Felix Lance Falkon, and Thomas Waugh, author of the similarly-themed bestsellers Out/Lines and Lust Unearthed. It features erotic line drawings and other artwork from ancient Greece to 1970s America, by artists both anonymous and infamous (including Tom of Finland, Graewolf, Blade, and Aubrey Beardsley), as well as an insightful narrative that provides a fascinating historical context for these images, including their production and dissemination. There is also a preface by Earl Kemp, one of the book's original editors, on the story of its publication at a time when the celebration of gay men's sexuality was still a dangerous thing.

Felix Lance Falkon was author of the original book which was titled A Historic Collection of Gay Art, published by the now-defunct Greenleaf Classics in 1972.

Thomas Waugh is the award-winning author or co-author of numerous books, including five for Arsenal Pulp Press: Out/Lines, Lust Unearthed, Montreal Main: A Queer Film Classic (with Jason Garrison), Comin' At Ya! (with David L. Chapman) and Gay Art: A Historic Collection (with Felix Lance Falkon). His other books include Hard to Imagine, The Fruit Machine, and The Romance of Transgression. He teaches film studies at Concordia University in Montreal, Canada, where he lives. He has published widely on political discourses and sexual representation in film and video, on lesbian and gay film and video, and has more recently undertaken interdisciplinary research and teaching on AIDS. He is also the founder and former coordinator of the Minor Programme in Interdisciplinary Studies in Sexuality at Concordia.

In addition to the titles below, Thomas is also co-editor (with Matthew Hays) of the Queer Film Classics series.

For me, the most interesting thing about this book is the way new information was found between the two versions, and how censorship has evolved since the beginning of the 1970s.... For the late 60s/early 70s perspective of the original author on art, gay rights and society, Gay Art does deserve its subtitle, "a historic collection."
-The Gay Comics List

The book retains Falkon's witty profiles and commentary [from the original], updating it with the artists' real names whenever possible, and adds a long introduction by Waugh, along with some clever interpretative captions.... The book has unquestionable value as a look into the fantasy life of gay men from the 1950s to the 70s.
-Bay Area Reporter

Gay Art: A Historic Collection is essential reading for anyone interested in gay graphics, gay history, in the cultural history of the 1960s and 70s, sex in the arts, or plain old hot pictures....
-Inches Magazine (part of a 9-page article, including an interview with co-author Thomas Waugh)

Gay Art is not only fun to look at, but it puts the genre of gay art in an historical perspective that is well written and most informative.
-Liberty Press (Wichita, KS)

Falkon and Waugh have done a huge service in presenting this historical material to us to enjoy, lust at and ponder over.
-Edge

This new edition is worth perusing for what it tells of an earlier era's depiction of sexuality and masculinity.... Those glancing at this volume will undoubtedly contemplate not only how much has changed but also how much has not in depicting gay male life.
-Canadian Book Review Annual

A fantastic re-issue. . . . This book is a must-have for anyone who is seriously interested in the history of gay art, and even for folks who are just wanting a general overview of the subject.
-Monotonous.net

Arty smut ... [including] a variety of accomplished, moving, alarming, and amusing works by artists, accompanied by engaging commentary.
-Outwords (Winnipeg)

Other titles by Thomas Waugh

Constructing the Sexual Self in the Internet Age

L.A. Plays Itself/Boys in the Sand