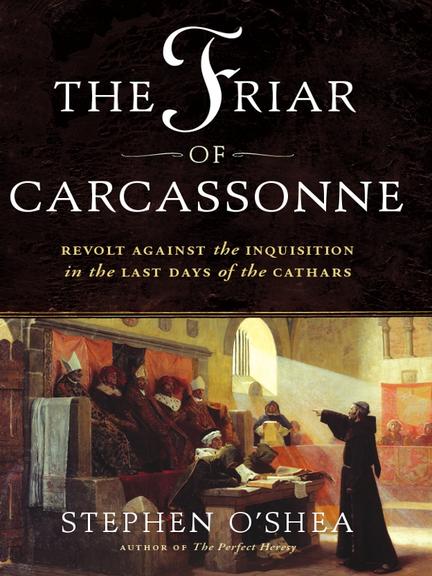 The dramatic story of courageous Franciscan friar who battled king, pope and Inquisition in his search for justice.

Nearly a century had passed since the French region of Languedoc had been put to the sword in the Cathar Crusade, but the stain of Catharism still lay on the land. Any accusation of Catharism invited peril. But repression bred resentment, and it was in Carcassonne that resistance began to stir. In 1300 a great orator emerged there to bring together the currents of resistance. Three years later the terrible prisons were stormed and the inmates set free. The orator was a Franciscan friar, Bernard DÈlicieux.The forces ranged against him included the ruthless Pope Boniface VIII, the Machiavellian French King Philip the Fair and the grand inquisitor of Toulouse, Bernard Gui (the villain of The Name of the Rose).

The Friar of Carcasonne, a compelling sequel to Stephen O'Shea's bestselling The Perfect Heresy, tells DÈlicieux's inspiring life and tragic story -- a story with contemporary resonance today. Bernard stood up to abuses of power, opposed secret trials, decried torture and inhumane incarceration. Drawn from the transcripts, which have survived from Bernard's trial, the wealth of everyday detail, the unfurling of events, even the conversations whispered and speeches given all are laid bare, allowing an unparalleled glimpse into the lives and hopes of medieval men and women. Only translated into English a decade ago, O'Shea has executed exhaustive research to produce this highly readable, almost cinematic narrative.

"Stephen O'Shea is more than a writer of historical narratives. He is designing engineer and pilot of a time machine that transports readers back in time 800 years or more...If this were the way history was taught in high school and colleges, we'd all aspire to be medieval scholars." -- Providence Journal

"O'Shea's thorough research and effortless writing exposes the political and economic side of the inquisition and its irreversible damage to the Catholic Church." -- Kirkus Reviews

Stephen O'Shea is an historian and the acclaimed author of Sea of Faith: Islam and Christianity in the Medieval Mediterranean World, The Perfect Heresy: The Revolutionary Life and Death of the Medieval Cathars, and Back to the Front: An Accidental Historian Walks the Trenches of World War I. Born in Toronto, he now lives in Providence, Rhode Island, and France.

Other titles by Stephen O'Shea

Revolt Against the Inquisition in the Last Days of the Cathars

Islam and Christianity in the Medieval Mediterranean World

The Revolutionary Life and Death of the Medieval Cathars

Back to the Front

An Accidental Historian Walks the Trenches of World War I