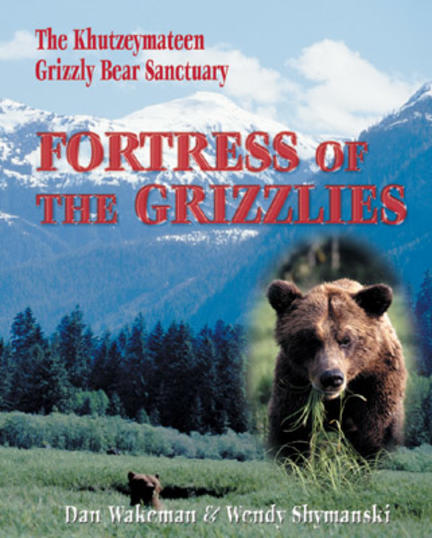 In a remote valley near the BC-Alaska border lives a remarkable group of grizzly bears who have never learned to fear humans. When logging threatened this valley, people from all over the world joined a battle to save the bears. In 1994, their efforts paid off with the establishment of the Khutzymateen Grizzly Bear Sanctuary, one of the world's most important protected wildlife areas.

Dan Wakeman, a core member of the Save the Khutzymateen campaign, was one of only two guides licensed to take visitors into the heart of this ecological reserve. Photographer Wendy Shymanski, who worked with Dan for many years, amassed a folio of exquisite colour photographs of the bears in this special part of the world. In Fortress of the Grizzlies, these avid naturalists share what they have learned and seen during years of respectful interaction with this community of grizzlies.

Although a businessman for most of his life, Dan Wakeman is a naturalist at heart, and his first love has always been the outdoors. Dan observes about 350 grizzly bears up close each year. He was instrumental in helping to establish the Khutzeymateen Grizzly Bear Sanctuary, and he and the sanctuary have been featured in two Discovery Channel documentary specials, which aired in 26 countries. He has also been featured in National Geographic and numerous other magazines. He currently lives in Prince George, BC. To reach Dan, email www.citytel.net/sunchaser or sunchase@citytel.net.

Wendy is also a master-level scuba diver, ski instructor/coach, triathlete and qualified avalanche technician. When she is not gazing into the eyes of North American animals, she is travelling the world.