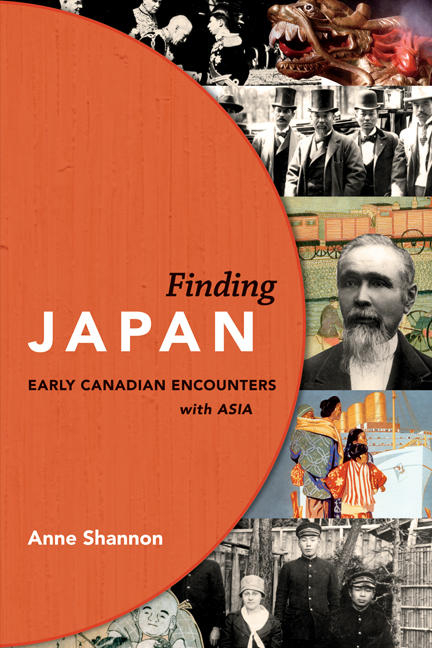 In contrast to the widely known experiences of Asian immigrants who came to Canada, this book looks at movement in the opposite direction. Using text and images, it is a collection of stories about how Canadians “found Japan,” the first place they reached when travelling westward across the Pacific.

These connections began as early as 1848, when the adventurous son of a Hudson’s Bay Company trader tempted fate by smuggling himself, disguised as a shipwrecked sailor, into the closed and exotic land of the shoguns. He was followed by an intriguing cast of characters—missionaries, educators, businessmen, social activists, political figures, diplomats, soldiers and occasional misfits—who experienced a rapidly changing Japan as it underwent its remarkable transformation from a largely feudal society to a modern state.

Now, when the world is becoming more Asia-centric, Finding Japan provides glimpses into an earlier era that challenged conventional perceptions about Canadian connections across the Pacific.

Anne Shannon developed an interest in early Canadian connections with Japan when she headed the economic and financial side of Canada’s embassy in Japan during the 1980s. A former member of Canada’s foreign service, she has also worked in the federal finance ministry, the United Nations and the World Economic Forum. She lives in Victoria, BC, and remains involved with Asia.

"The book is an intriguing, informative and well-illustrated overview of a cast of individual characters—rogues and heroes, scholars and dipl;omats, missionaries, naval officers, adventurers, educators, politicans, traders and business tycoons-drawn by the exotic world of Japan over a century of contact." —Hugh Stevens, bout de papier

“MacDonald’s experience is unique, but he is not the only Canadian to have left a mark in Japan in those early days. Many others did and it is their lives that Shannon chronicles in Finding Japan, a well-illustrated and fascinating new history of Canada’s relations with its closest Pacific neighbour. . . . A fascinating aspect of Shannon’s book is how she revisits the life and career of well-known Canadian figures to show their connections with Japan.” —Martin Laflamme, Vancouver Sun

“Shannon's stories range across centuries and the inclinations of the subjects: from exploration and teaching to commerce, diplomacy, politics, religion and beyond. . . . Others who love offbeat tales of historical connections will be delighted she followed her curious mind to the penning of this wonderful book. —Moira Dann, Times Colonist

“Written with wit, personal flare, and acute observation of human behaviour, Finding Japan engages an educated general public as well as students and scholars interested in the intersection of the modern histories of Japan and Canada. Further, a remarkable collection of photos and images enhances the delight of reading. Ultimately, the book offers a new and pleasant way to assess the historical roots of Canada’s links and connections to Japan and the Pacific World. —Yukari Takai, BC Studies

"A fascinating, comprehensive overview of the emergence of Western culture in Japan." —BC Books for BC Schools

"In this broadly researched and well-illustrated book, [Anne Shannon] rescues from obscurity a number of people with Canadian connections who played a part in laying the groundwork for trade and diplomatic relations between Canada and Japan–goals that weren't achieved without missteps by us and misfortunes for them." —George Fetherling, Diplomat and International Canada

Finding Japan presents a fascinating, comprehensive overview of the emergence of Western culture in Japan, highlighting Canadian influences. Divided into three periods: arriving, growing and struggling (18481950), a century of Canadian influences are revealed through intriguing vignettes. Consider ‘foreign barbarians’ such as Ranald MacDonald, the first Canadian to land on forbidden Japanese shores, posing as a shipwrecked sailor; missionaries, merchants, reformists (i.e., females hired to mould the next generation of Japanese women); rare female travelers and entrepreneurs, all of whom left their mark. Also explored are the ‘Wild West’ settlements of the Far East, the CPR’s Asian ocean service and Canadian literary influences particularly Anne of Green Gables.

Shannon was in charge of financial and economic duties at Tokyo’s Canadian Embassy.