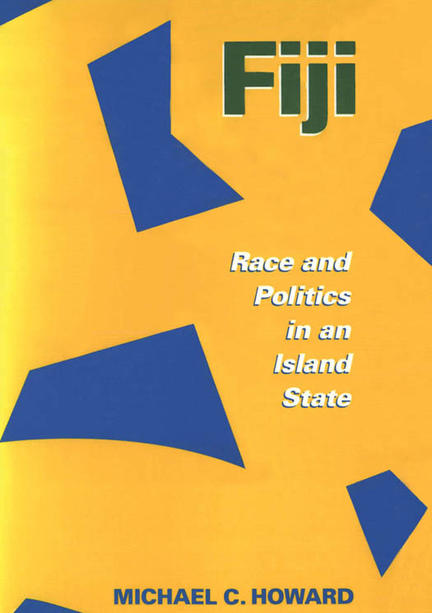 In 1987 -- first in May and again in September -- Fiji, which had often been regarded as a model for racial co-existence, surprised the rest of the world by staging not one but two coups. Most interpreters of the Fijian political scene saw the events as a result of tension between native Fijians and members of other ethnic groups. Michael Howard argues in this book that this interpretation is simplistic. Instead, he points out, the May coup was a strike against democratic government by elements associated with Fiji's traditional oligarchy seeking to hide behind a mask of populist communalism.

Howard traces the evolution of Fijian politics from the precolonial chiefdoms, through the colonial era and into the postcolonial period, emphasizing the developments during the latter half of the 1980s. As a close and involved observer, he draws a convincing picture of the leading actors in contemporary Fijian politics and the motives guiding their actions. He describes how the ruling elite -- the Fijian chiefly families and their allies -- has maintained its power by manipulating communal or racially based sentiments and how the opposition has attempted to change the situation by creating political alignments based on social class.

In the central part of the book Howard chronicles the rise of the Fiji Labour Party and its 1987 election victory over the ruling Alliance Party. He then discusses the short-lived regime of the Bavadra government and the events leading up to the May 1987 coup. Finally, he looks at events following the coup, as the oligarchy has sought to reimpose control in the face of popular opposition and internal division, discussing their implications for the social condition of Fiji, its international politics, and its internal ethnic relations. The book concludes with the death of Timoci Bavadra in late 1989.

A perceptive case study of racial politics in the modern world and a significant new approach to the understanding of the dynamics of a non-western political system, Fiji: Race and Politics in an Island State provides a timely and comprehensive analysis of recent events in this important island state.

Michael Howard holds a joint appointment with the Centre for International Studies and the Department of Sociology and Anthropology at Simon Fraser University. From 1982 to 1987 he taught at the University of the South Pacific in Suva, Fiji. He is founding editor of the journal South Pacific Forum and is the author of a number of books and articles on political and economic issues in the South Pacific.

Howard's book is the best and most lucidly written account of the background and events of the Fijian coup to date.

Acompelling narrative with care and clarity. His book is recommended as one of the most considered and reliable accounts among the many now available on the first coup d'etat in the Pacific Islands.

The book, Fiji, Race and Politics in an Island State is excellent reading material for those who want to find out what went wrong in an island paradise. It is no doubt the best book written on the 1987 crisis in Fiji ... Even those who do not have the remotest idea where Fiji is or what it is, will nonetheless find the book interesting reading because of the political dramas it describes.