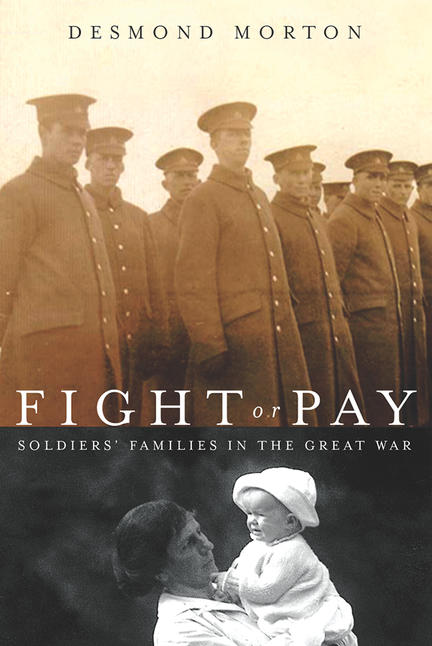 The First World War is remembered largely for the immense sacrifice in life and limb of Canadian soldiers. In Fight or Pay, Desmond Morton turns his eye to the stories of those who paid in lieu of fighting – the wives, mothers, and families left behind when soldiers went to war. A pan-Canadian story, Fight or Pay brings to light the lives of thousands of valiant women whose sacrifices have been overlooked in previous histories. It is an incisive and honest look at the beginnings of a social welfare system that Canadians have come to think of as intrinsic to citizenship.

DESMOND MORTON is professor of history at the University of Toronto and principal of Erindale College. He is the author of ministers and Generals: Politics and the Canadian militia, 1868-1904, A Peculiar Kind of Politics: Canada’s Overseas Ministry in the First World War, A Campaign (with J.L. Granatstein), and numerous other books.

Desmond Morton has written a work that helps to fill a void of information about a turbulent period in our history. It will, I am sure, become a key reference work for those studying the economic and social aspects of the home front during the Great War.

Well-argued and finely written, especially given its detailed social and financial policy subject matter, Fight or Pay underscores two little-known truths about the war. The conflict cost lives at home as well as abroad, and Canada's social security net owes as much to the Great War as it does to the Great Depression.

Fight or Pay is a beautifully written book about the history of a society and its government in wartime. Not only does Morton shed fascinating light on the topic of soldiers’ dependants, but he reveals the much broader implications for the study of gender, class, state power, and race.

Fight or Pay is a surprisingly gripping story of Canadian hipocrisy, selfishness, officiousness and stoical endurance. This is a very professional piece of work, covering an area of interest that may seem limited. But Desmond Morton has produced a book that is eminently readable, for anyone with the slightest curiosity about Canada’s past. Its appeal is rooted in his lively writing, in the curiosity that drove his research and the industry that satisfied it — and, despite his consistent scholarly professionalism, an animating dose of healthy and well-metered anger at a government that valued appearance over reality and fiscal caution over humanity.

Desmond Morton has once again demonstrated his talent for weaving national narrative in this finely crafted account of the experience of soldiers’ families during the First World War. Morton’s extensive understanding of the war immeasurably enriches his treatment of soldiers and civilians alike in Fight or Pay: Soldiers’ Families in the Great War Uncovering what happened is the first step to understanding the historical experience of the family in the First World War, and with Fight or Pay, Desmond Morton has built a marvelous foundation.

Fight or Pay is an elegantly written work of penetrating analysis that showcases the author’s expansive knowledge of Canada’s First World War experience. Part military, social, family and administrative history, it is a groundbreaking addition to the growing literature of Canada’s home-front history and will undoubtedly inspire further historical inquiry.

Other titles by Desmond Morton

A Short History of Canada

A Military History of Canada

and other recent cartoons by Aislin

The Mystery of Frankenberg's Canadian Airman

Canada and the Two World Wars

An Illustrated History of the Canadian Labour Movement

Its History and the Canadians Who Shaped It

When Your Number's Up

The Canadian Soldier in the First World War