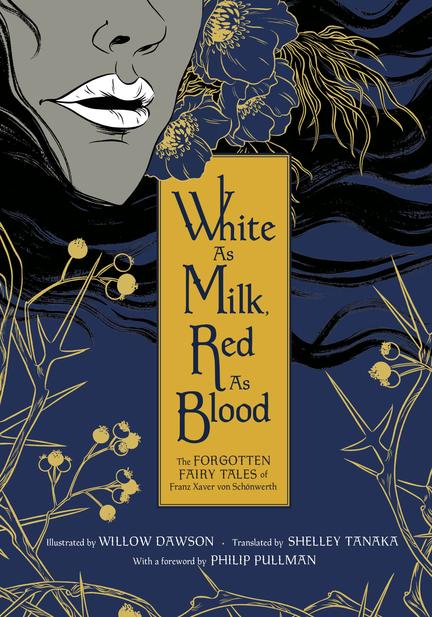 “Ferocious. And funny, and moving, and delightful . . . Illustrated with wonderful freedom and zestful inventiveness.” —Philip Pullman from the Foreword

This striking, richly illustrated edition of long-lost German fairy tales is not a book for children. It is a book for adults. Or for adults to frighten children into behaving...whichever you prefer.

In 2009, a trove of lost fairy tales collected by Franz Xaver von Schönwerth--a 19th-century collector of Bavarian folk tales and contemporary of the Brothers Grimm--was unearthed in a municipal archive in Germany. Unlike the Grimms, who polished the stories they collected, adapting to contemporary tastes, von Schönwerth recorded the stories as they were told, plucking them directly from the living, breathing tree of oral storytelling, retaining their darker themes and sometimes shocking violence. Von Schönwerth published a single volume of these tales in his lifetime, but the vast majority languished and were forgotten over the years, effectively frozen in time until their recent rediscovery.
Now, award-winning illustrator Willow Dawson, in collaboration with translator Shelley Tanaka, has brought these long-lost tales unforgettably to life, illuminating with striking woodcut-style illustrations a spectacular collection that will change the way you look at fairy tales forever. Paired with Dawson's arresting artwork, the stories in White as Milk, Red as Blood race with palpable energy through fantasy landscapes darker, bawdier and racier than anything we find in Disney or the Grimms.
Following the tradition of illustrated fairy-tale collections, White as Milk, Red as Blood is the very first fully illustrated, full-colour edition of Franz Xaver von Schönwerth's work. It is a timeless tome of enchantment and foreboding: tales--as haunting as they are profound--of powerful princesses, helpless men, lecherous villains, virtuous girls, witches, giants, at least one female serial killer, mer-people, shape-shifters and talking beasts--a kaleidoscope of wonders both familiar and entirely new; rich and strange.
Dawson and Tanaka's dark and lively take on von Schönwerth's collected tales will appeal to fans of Mike Mignola's classic fantasy comic-book series Hellboy.

Award winning author and illustrator Willow Dawson’s books include Ghost Limb, Hyena In Petticoats, The Big Green Book of the Big Blue Sea with Helaine Becker, Lila and Ecco’s Do-It-Yourself Comics Club, No Girls Allowed with Susan Hughes, and the upcoming The Wolf-Birds. Her books have been supported by the Toronto Arts Council, the Ontario Arts Council and the Canada Council for the Arts. Willow Dawson also teaches Creating Comics and Graphic Novels at the University of Toronto’s School of Continuing Studies. She lives in Toronto.

“Dawson moves beyond the traditional illustrative style associated with fairy tales, in which images represent peak moments in the narrative. For these uniquely dark, sometimes spare stories, she focused instead on complementing the text by elucidating its more ambiguous undertones and portraying its moods.” —Quill & Quire
“Ferocious. And funny, and moving, and delightful . . . Illustrated with wonderful freedom and zestful inventiveness.” —Philip Pullman from the Foreword

“Schönwerth’s tales have a compositional fierceness and energy rarely seen in stories gathered by the Brothers Grimm or Charles Perrault.” —The New Yorker

“[This] new collection of German folk stories . . . challenges preconceptions about many of the most commonly known fairytales. . . . Many of the stories centre around surprisingly emancipated female characters.” —The Guardian

“Schönwerth’s legacy counts as the most significant collection in the German-speaking world in the nineteenth century.” —Daniel Drascek, University of Regensburg

“At the time his work was praised by many, including Jacob Grimm, who in 1885 stated: ‘Nowhere in the whole of Germany is anyone collecting [folklore] so accurately, thoroughly and with such a sensitive ear’. . . . Like his counterparts, von Schöenwerth’s work consists of tales passed on by word of mouth over generations by locals in area villages. The stories may be similar, but the local traditions, culture and history provide new life to the tales. . . . If you’re a fan of the tales passed on by the Brothers Grimm, you may want to get your hands on these new stories.” —Stephen Fuchs, German Pulse

Other titles by Willow Dawson

Big Green Book of the Big Blue Sea, The

The Story Of Suffragette Nellie Mcclung

Tales of Daring Women Dressed as Men for Love, Freedom and Adventure