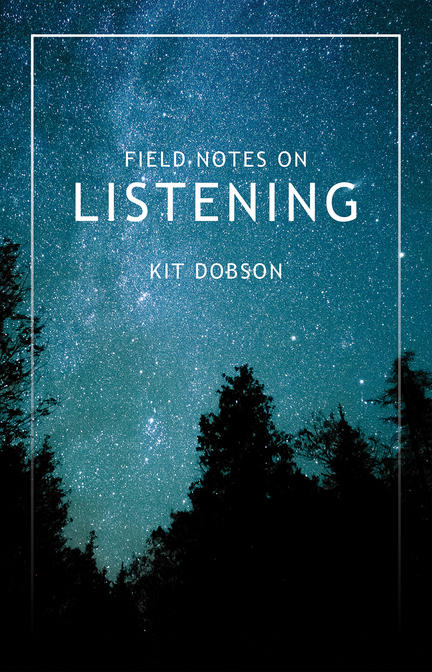 When Kit Dobson’s daughter looked at the field of stars on the screen at the beginning of a new Star Wars movie in the theatre and remarked to her father, “Yeah, right. There’s not that many stars,” Dobson suddenly realized his daughter had never truly seen the night sky. From then on Dobson began to think seriously about how little we, as humans, interact with the natural world and how that has changed our place within it. Field Notes on Listening is a response to our lack of connection to the land we call home, the difficult history of how many of us came to be here and what we could discover if we listened deeply to the world around us. Written in brief, elegant sections, Field Notes on Listening starts at Dobson’s kitchen table, a family heirloom, and wends through time and space, looking at his family’s lost farm, the slow violence of climate change, loss of habitat, the tensions of living in late-stage capitalism and through careful listening strives to find a way through it all, returning, in the end, to home and the same table.

Kit Dobson lives and works in Calgary / Treaty 7 territory in southern Alberta. His previous books include Malled: Deciphering Shopping in Canada and he is a professor in the Department of English at the University of Calgary. He grew up in many places across Canada, but returned again and again to the landscapes of northern Alberta where his family members settled – and that continue to animate his thinking.

Other titles by Kit Dobson

Undoing Discipline in the Humanities Classroom

Authors Speak on the Literary Marketplace