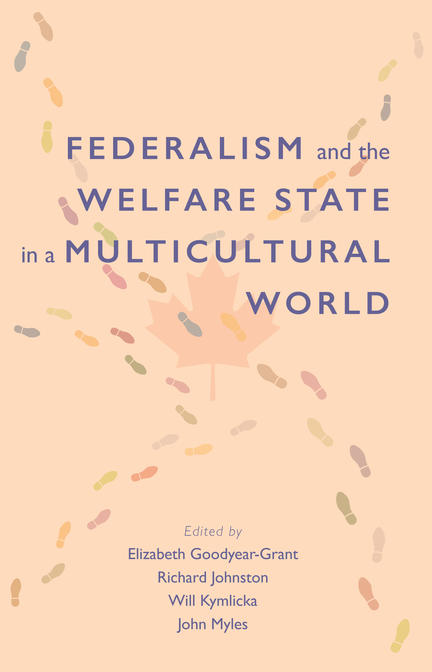 Until the 1990s social policy played an integrative role in Canada, providing a counter-narrative to claims that federalism and diversity undermine the potential of social policy. Today, however, the Canadian model is under strain, reflecting changes in both the welfare state and the immigration-citizenship-multiculturalism regime.

Federalism and the Welfare State in a Multicultural World illustrates that there are clear trends that, if unchecked, may exacerbate rather than overcome important social cleavages. The editors argue that we are at a crucial moment to re-evaluate the role of social policy in a federal state and a multicultural society, and if federalism and diversity challenge traditional models of the nation-building function of social policy, they also open up new pathways for social policy to overcome social divisions. Complacency about, or naive celebration of, the Canadian model is unwarranted, but it is premature to conclude that the model is irredeemably broken, or that all the developments are centrifugal rather than centripetal.

Social policy is integral to mitigating divisions of class, region, language, race, and ethnicity, and its underlying values of solidarity and risk-sharing also make it a critical mechanism for nation-building. Whether social policy actually accomplishes these goals is variable and contested. The essays in this volume provide some timely answers.

Elizabeth Goodyear-Grant is associate professor of political science at Queen's University and the director of the Queen's Institute of Intergovernmental Relations and the Canadian Opinion Research Archive.

Richard Johnston is Canada Research Chair in Public Opinion, Elections, and Representation at the University of British Columbia.

Will Kymlicka is the Canada Research Chair in Political Philosophy at Queen’s University. He is the author of seven books published by Oxford University Press, most recently Zoopolis: A Political Theory of Animal Rights (2011), co-authored with Sue Donaldson. His previous books include Multicultural Citizenship: A Liberal Theory of Minority Rights (1995) and Multicultural Odysseys: Navigating the New International Politics of Diversity (2007). In 2013, he delivered the HLA Hart Memorial Lecture at the University of Oxford on Animals and the Frontiers of Citizenship.

John Myles is professor emeritus of sociology and senior fellow in the School of Public Policy and Governance at the University of Toronto.

Other titles by Elizabeth Goodyear-Grant

Canada: The State of the Federation 2017

Canada at 150: Federalism and Democratic Renewal

Other titles by Richard Johnston

The Challenge of Direct Democracy

Dynamics of a Canadian Election

Other titles by Will Kymlicka

A New Frontier of Interspecies Justice?

The Broadview Anthology of Social and Political Thought: From Machiavelli to Nietzsche

The Strains of Commitment

The Political Sources of Solidarity in Diverse Societies

edited by Keith Banting & Will Kymlicka

edited by Jane Boulden & Will Kymlicka

Canadian Perspectives on Animals and the Law

Multiculturalism and Minority Rights in the Arab World

edited by Will Kymlicka & Eva Pfostl

Canada and the World

edited by Will Kymlicka & Kathryn Walker

The Broadview Anthology of Social and Political Thought: Essential Readings

A Political Theory of Animal Rights

by (author) Sue Donaldson & Will Kymlicka

Other titles by John Myles

Inequality and the Fading of Redistributive Politics