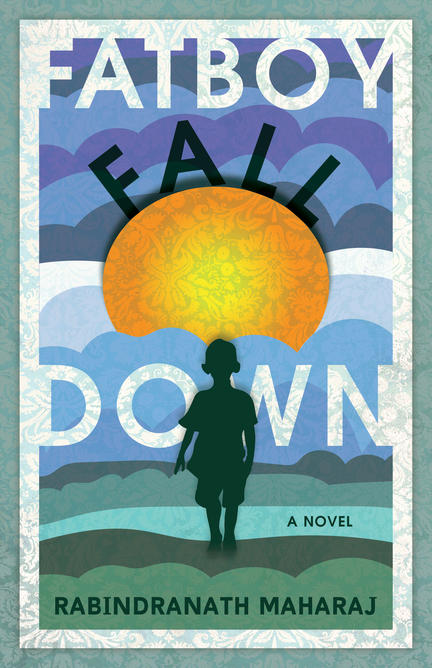 Winner of the 2019 Foreword Indies Silver Medal for Literary Fiction

“Heavy yet rewarding, Maharaj's novel is a reminder that resilience takes many forms — and that most exceed our naming.” — Kirkus Reviews

A child ridiculed for his weight, a son overshadowed by a favored brother, a husband who falls short of his wife’s ambitions, an old man with a broken heart… As Orbits’s life passes, he doggedly pursues a simple dream — a little place in the country where a family might thrive — while wondering if he can ever shake free of the tragedies that seem to define him.

Fatboy Fall Down is the lush and heartbreaking musings of a man trying to understand his place in the world. Though shot through with sadness, Fatboy Fall Down is also full of surprising moments of wry humor, and Rabindranath Maharaj's deft touch underscores the resilience of the human spirit.

Rabindranath Maharaj, a Trinidadian teacher and journalist, wrote several of the stories in The Interloper during the year he spent in Fredericton. He now writes and teaches in Toronto.

Excerpt: Fatboy Fall Down: A Novel (by (author) Rabindranath Maharaj)

When he was fifty-eight years old and preparing for his retirement in a slumberous cocoa village nestled within a valley’s crook, Orbits would look at the parakeets, so tiny and green they could be mistaken, from a distance, for skittering leaves and he would recall his dream of reading the weather report with a macaw perched on his shoulder. The bungalow, its walls wrinkled by vines that trailed from the lemon and guava trees and seeming to glide into the open windows, he had coveted for half his life and his ease in acquiring it at an affordable price, encouraged him into speculating about other long-delayed pursuits.

He would visit his daughter whom he had not heard from nor seen for over a decade. He would populate the pond at the back of his house with red tilapia and augment the yard with fruit trees — cashews, mangoes, golden apples, cherries and plums. He would attend to his growing vision problems and finally finish his meteorology course. All of this, he mentioned in letters to Wally, his old friend from the Ministry of Agriculture. It was Wally who, before his relocation to Toronto, had introduced him to life in the capital and who had explained how aspects of the island’s past had engrained themselves into a culture of lime and unexpected generosity always twinned with reproach. Wally, too, had noted that the faddishness of the boom years did not completely displace the old way of thinking: the refusal to be persuaded, the childish presumptuousness, the nursing of grudges, the fear of competition, the absolute dread of being ignored.

Wally’s heart attack had preceded Orbits’ by a few years and in a letter, Orbits had joked about both men resting side-by-side on hospital beds. But Wally had survived his heart attack.

In the evenings, Orbits walked across the yard of the old shop where tufts of knotgrass sprouted from concrete and asphalt and he mentioned his plans to the sceptical shopkeeper. “Just a few months again for my pension,” he told the shopkeeper. “I have my bucket list.”

The shopkeeper, offended by Orbit’s optimism, replied, “Careful the bucket don’t tumble down the hill and take you with it. Remember what happen to Jack and the other miserable little one.” The shopkeeper knew Orbits only as a local politician of negligible importance, an unremarkable man trying to be remarkable. If Orbits, in an uncharacteristic burst of candour, had described the torment that marked his childhood and which had left both scars and a faltering imagination; if he had spoken of the events that had forced him to return to his parent’s house following his brother’s suicide, only to witness the life squeezed out of both; if he had mentioned that for most of his life, always expecting rejection, he was forever preparing for it; if he had confessed any of this, the shopkeeper, a tiny man with an unevenly shaped moustache and bristly eyebrows that gave him a harried and reflective look, would not have seen Orbits as any different from anyone in the island.

But Orbits had grown to see himself as different, and separate. For most of his life he had little idea of what the future might bring; he never planned for anything and when a little slice of luck fell his way, he briefly imagined it was the world settling itself, balancing the turmoil of his early years.

Yet, at the beginning of his life, before the birth of his brother, he never suspected there was anything unusual or shameful about himself. There was nothing unnatural about the rolls of supple fat that hung from his waist and which his mother pinched and tickled whenever he fell from the sofa or the front stairs. Or with his father’s amused comment, “Clear the road, Mamoose. The steamroller coming through.” He assumed the responses of his parents to his weight and clumsiness were normal and that in every house in the village, there were little fatties like him rolling around to the amusement of the adults.

Then, a few months prior to his fifth birthday, his slim and perfect brother was born. And shortly after, he was sent off to school. He expected he might find there some variation of his parents’ jolliness but he discovered that school was a place of hardened bullies and frustrated teachers waiting patiently for students like him while they nursed their hangovers. He also learned quickly that it was a bad idea to run away from the other boys because invariably he tumbled on the road, drawing even more ridicule. One day while he was trying to pull himself from the slippery mud, a group of boys pretended to be applauding his effort. As he rolled back and forth to get some traction, one of them said, “It look like Fatso rocking himself to sleep.”

“Heavy yet rewarding, Maharaj's novel is a reminder that resilience takes many forms — and that most exceed our naming.” — Kirkus Reviews

“The vividness of island life, so richly conveyed, adds to the depth of this remarkable character study.” — Booklist

“In Fatboy Fall Down, Orbits gazes into the distance, hoping to escape the reality of who and where he is and what it all means.” — Foreword Reviews

“The very slightness of [Orbits’s] journey is perhaps what is most intriguing about this subtle and atmospheric novel: It is not exactly satisfying, but convincing, a tiny victory in the hot, long afternoon.” — The Globe and Mail

“Author Maharaj was born on the island of Trinidad, and he suffuses his novel with wonderful detail of the varied and exotic indigenous plants and animals of the West Indies. But most of all there is the spoken language of the characters, almost musical in its manner and rich in imagery . . . This is a quiet book that builds slowly, gradually taking on momentum and urgency, just as the passage of time seems so slow when we are young and so fleeting when we get older.” — New York Journal of Books

Other titles by Rabindranath Maharaj

The Book of Ifs and Buts