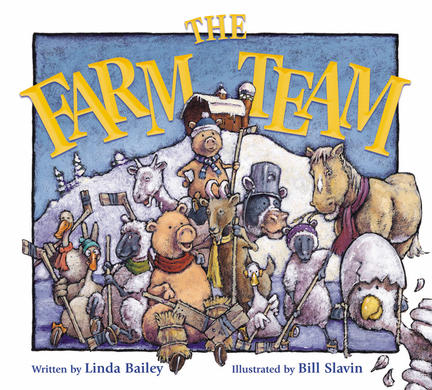 For fifty years the animals on Stolski's farm have played their hearts out for the Stolski Cup --- the dream of every hockey team all over the northland. And every year the Farm Team has lost to the nastiest, smelliest, snarlingest bunch of varmints ever to don skates --- the Bush League Bandits.

As soon as the puck drops for this year's playoff game, the Bandits, playing as dirty as ever, take an early lead. A Bandit porcupine named Needles starts ramming Farm Team players, while the weasels slash and spear. But the Farm Team's goalie Big George blocks some tough shots, while Billy the goat and Vera the goose net three goals to tie things up. Then the Bandits bring in a bruiser of a substitute player so big and mean that these plucky underdogs could be in for a serious mauling.

From the award-winning team of Linda Bailey and Bill Slavin and packed with on-ice action and laughs, this is the picture book hockey fans of every age have been waiting for.

A sassy, well-crafted story... the mostly full-page illustrations are packed with little details that will amuse children and adults alike, ... Bailey and Slavin have produced a gem of a picture book that will remain popular for as long as hockey underdogs continue to compete for Lord Stanley's famed cup.

Bailey's story reads aloud well, while Slavin's artwork captures its drama and humor in a series of action-filled acrylic paintings... Every child who has watched a bigger, brawnier opposing team take the field will feel for the plucky Farm Team.

Young hockey fans will be thrilled with this offering, which will appeal to sports fans and animal lovers in kindergarten through second grade, as well as the adults who read aloud to them.

The surprise ending will bring cheers form the crowd as they ask for repeated readings.

Slavin's goofy acrylics playfully realize the joyful mayhem of shinny, and Bailey's story gets the competitive burn just right, even if for a bunch of chickens, sheep and piglets.

The Farm Team is up against the nastiest bunch of varmints ever. Packed with blistering on-ice action and laughs, this story will delight hockey fans of all ages.