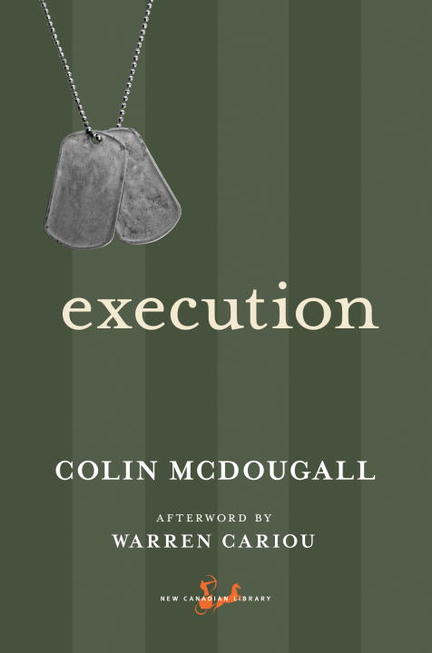 The great Canadian novel of the Second World War in Italy, winner of the 1958 Governor General’s Award
Lieutenant John Adam, recovering from wounds sustained in the Italian campaign of 1943, faces a terrible dilemma when he finds that one his men, a volunteer, is to be executed, shot by his comrades.

His ham-­red cheek pulled accusingly from the butt of his Bren gun, his eyes flashed wide with indignation. Ewart, his Number Two on the Bren, propped on one elbow, returned the look with disgust; the permanent sneer on his sharp-­pointed face became more pronounced. “Listen, you stupid bastard,” Ewart said in a voice of dispassion. “You’re gonna shoot where you’re told — get it?”

Sergeant Mitchell heard them and came sculling across the ground on massive forearms. The reserve section of Ten Platoon was spaced in firing position on a knob of Sicilian parkland, studded with tall, umbrella-­topped trees. Four hundred yards distant, on the same level but obscured by trees, was a connected group of stone buildings, identified on the map as Castello Donato; and this was the platoon’s first battle objective. At this moment their platoon commander, Lieu­tenant Adam, was leading the other two sections in a slow, silent advance up the slope which led to the iron gates of the castle. Every eye had been anxiously following his progress.

Corporal Fowler, the section commander, yielded place to Sergeant Mitchell gratefully. Mitchell sat, steadied his elbows on thick thighs, and peered through his binoculars. He had to squint to see beyond the sunlight dappling the grillwork on the ornamental iron gate; then all at once he sat rigid and stopped breathing. For this moment he even forgot to order the section’s weapons back on their target.

Here at last, in the afternoon of their first day at war, the enemy was visible; and that enemy consisted of soldiers arrayed in blue and gold, sabres belted at their side, and mounted on horses. Horses! Behind the horsemen, in a kind of courtyard, some baggy-­panted infantrymen milled about, but there was no mistaking these others: they were cavalry. And Infantry Section Leading, which Sergeant Mitchell knew by heart, said not one word about cavalry.

Years before Mitchell’s nose had been broken in two places, and when he scowled his nose became flattened to one corner of his mouth. At this moment his scowl made him appear ferocious.

Around him the riflemen of the section were up on their elbows, weapons neglected, mouths agape. But Mitchell was unaware of them. His glance was fixed on the line of advancing men. What the hell was going to happen, Mitchell wondered, when they bumped those cavalry? He watched the lean, stalking form of Lieutenant Adam.

Mitchell longed to be with him too; but he had to recognize his platoon commander’s good sense in leaving him back here to organize the covering fire. Lieutenant Adam was competent; during the assault landing last night that was the discovery each man had made about the other. Now, as he watched, Mitchell found himself thinking that in many ways the two of them were much alike — both were solidly built and tough, and recognized a job of work when it had to be done. He’s a good man, Mitchell told himself: we’re going to make a good team. His glance was appraising as Adam moved through the parkland.

Behind him Krasnick’s voice recalled him brusquely to the present moment. “Horses!” said Krasnick, choking on the word. “I ­can’t shoot horses!” Krasnick had been raised on a farm in Manitoba. He was considered stolid, almost to the point of stupidity, and he had never before been known to display so much emotion on any subject.

But at once Sergeant Mitchell was in sure control again. “Get your weapons back on the target!” he hissed savagely to the whole section. Then to Krasnick, as though explaining a point of conduct to a small boy: “Look, Krasnick, you ­don’t have to shoot the horses. Shoot the men — off the horses.”

Krasnick thought about this and after a moment he seemed satisfied. A moustached giant of a man, sitting astride a white charger, appeared to be delivering an oration to his mounted troops. The muzzle of Krasnick’s Bren gun pointed back at the grillwork, steadied, and held firm on the centre of the giant’s chest.

Mitchell lay down, poked his own rifle forward, and at once his glance darted anxiously back to Adam. The advancing force was now in the last hundred yards but as yet they could neither see nor be seen from the iron gates of the castle. For an instant Mitchell closed his eyes and willed a message across the parkland to Lieutenant Adam. Just take it easy, he tried to tell him: We’ll look after those cavalry for you. Every­thing’s going to be all right. . . .

The Poetry of Duncan Mercredi