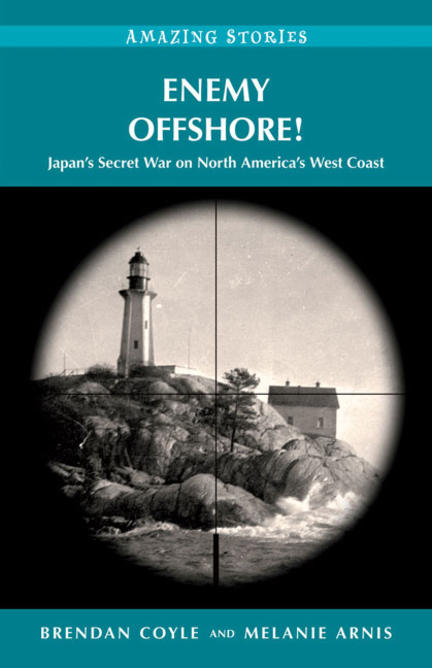 On June 20, 1942, the lighthouse at Estevan Point on Vancouver Island was shelled by the Japanese submarine I-26. It was the first enemy attack on Canadian soil since the War of 1812. But this was only one incident in the incredible and little-known Japanese campaign to terrorize North America’s west coast and mount an invasion through the Aleutian Islands.

Enemy Offshore is a dramatic, comprehensive narrative of the events that unfolded as Japan brought the Second World War to North American shores. Submarines—Japan’s formidable I-boats—stalked the West Coast, attacking ships and shore stations. A Japanese aircraft-carrier force attacked Alaska twice, grabbing a footing in North America and launching a bloody conflict in the Aleutians. The Japanese bombed an Oregon forest in an eccentric plan to start mass fires and desperately launched thousands of bomb-laden balloons against Canada and the United States.

Here are also the stories of ordinary citizens—fishermen, Natives and wilderness warriors who allied with the military in the extraordinary but largely unknown war on the West Coast.

Brendan Coyle was born and raised in New Westminster, British Columbia, the youngest of 10 siblings. He always had a keen interest in ships and all things nautical, and he was determined to work in BC`s historic maritime industry. He earned his basic SCUBA certification at 14 and worked his way through the "ranks" from stints as a deckhand and commercial diver to journeyman fabricator/welder in the fishing and boat-building industries. He is now employed as a maintenance planner in ship repair.

Brendan`s freelance articles appear often in the Victoria Times Colonist. He has also written for the Vancouver Sun, Vancouver Province, Diver Magazine, and Canadian Diving Journal. His interest in Canadian and American military history, vintage aircraft and Canada`s north led him to write about the unknown war on North America`s West Coast. Brendan Coyle lives in Steveston, BC, with his wife, Melanie Arnis, and two daughters, Meghan and Rhianna.

Melanie Arnis lives with her husband, Brendan Coyle, in Steveston, BC. Melanie has been an educational assistant supporting children with special needs for the last 30 years. She has written and edited articles and newsletters in many volunteer capacities, as well as collaborating with Brendan on Enemy Offshore! and editing his other writings.

“Coyle and Arnis provide a good introduction to a subject that might be unknown to general readers. The book is an easy read, perhaps even possible in the 90-minute Saanich-Tsawwassen ferry ride or waiting in line for a missed ferry.” —Chris Madsen, Northern Mariner/Le marin du nord