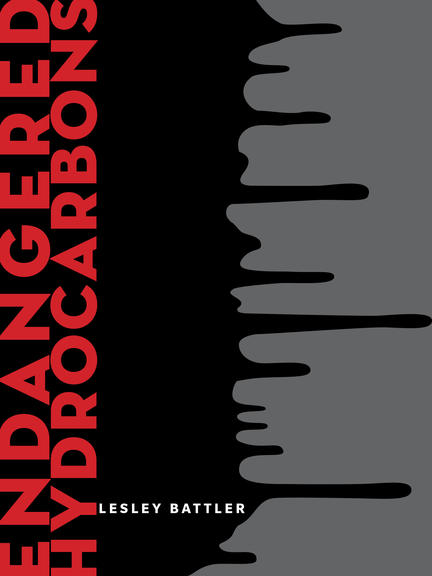 Fracking - tar-sand runoff - dirty oil extraction. This is the language of our oil-addicted 21st century society: incredibly invasive, blatant in its purpose, and richly embedded in mythological and archetypal symbolism. The ultimate goal of the industry: To core the underworld.

Endangered Hydrocarbons, Lesley Battler's first full-length collection of poetry, shows that the language of hydrocarbon extraction, with its blend of sexual imagery, archetype, science, pseudoscience and the purely speculative, can be as addictive as the resource it pursues.

Using pastiche and wordplay, Battler shines a floodlight on the absurdity and pervasiveness of production language in all areas of human life in the oil fields, including art, culture and politics. Incorporating texts generated by a multinational oil company, and spliced with a variety of found material (video games, home decor magazines, works by Henry James and Carl Jung), Battler deliberately tampers with her found material, treating it as crude oil--excavating, mixing, and drilling these texts to emulate extraction processes used by the industry.With traces of Dennis Lee's Testament, Larissa Lai's Automaton Biographies, and Adam Dickinson's The Polymers, this lively and refreshing take on a polarizing topic will resonate with readers of contemporary poetry who connect with environmental issues and capitalist critique.

Born in Barrie, Ontario, Lesley Battler's work has been published in Alberta Views, Arc, Arc (Quarc issue), Contemporary Verse 2, dandelion, filling Station, Matrix, Other Voices, PRISM international, and west coast line. She won the PRISM international Earle Birney award (2012), and the University of Calgary Poem of the Season award (2009) for a poem that became part of Endangered Hydrocarbons. Battler received an MA in English from Concordia University, and currently lives in Calgary, where she works in the petrochemical industry.

Electric and unexpected... Lesley Battler's "Idylls of Inuvik" [is] a zinger of a poem that uses the internal, molecular energy of words to enact a merciless takedown of the still-colonial attitudes at play in the economics of Canada's North.
--Anita Lahey, Arc Poetry Magazine

Lesley Battler's fabulous Endangered Hydrocarbons is a high-octane romp through Alberta's oil patch... a tour from office tower cubicles to bitumen sands extraction sites. But it's as though the excursion is conducted jointly by the spirits of Edward Snowden, Groucho Marx, and Lewis Carroll... Battler distills, blends, and blurs the jargons of geology, chemistry, oil exploration, drilling technologies, and corporate spin.
- Tom Wayman

Lesley Battler's cut-up work will continue to remind me that it will always be easier to remove overburden than it will be to clear-cut a small forest. Her work brings us the spectacle of the wars of rhetoric--with their victors & victims of ideology, hijacking knowledge and power with 'approved terms of vocabulary.
-- Paul Zits, filling Station