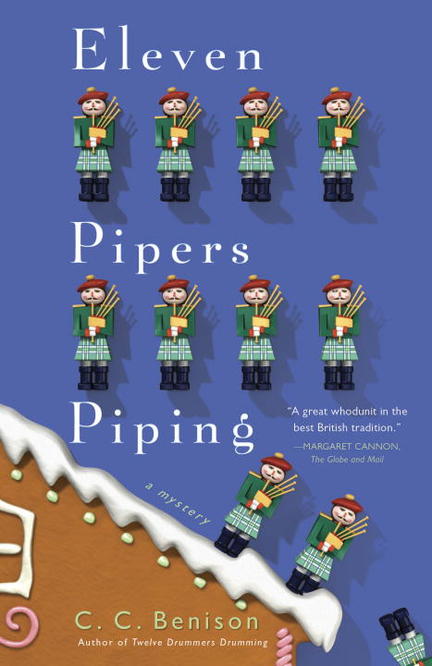 The idyllic hamlet of Thornford Regis is home of the esteemed vicar Tom Christmas, festive seasonal traditions and more than a few suspicious deaths. Fans of Louise Penny and Anne Perry will be charmed by this new series of cozy mysteries, featuring an "irresistible addition to the ranks of clerical sleuths." And it's now available in paperback!
The annual Burns dinner at Thornford Regis is an occasion for bagpipes, haggis and scotch. It ends up an occasion for tragedy when Will Moir, one of the pipers, is found alone, in a tower, dead of an apparent heart attack. Father Tom Christmas, the vicar of the town, is privy to all of the secrets of its inhabitants, and is one of the first to find out that Will Moir was poisoned. The town's suspicions go in many directions, and Christmas soon learns secrets that have been kept for generations--illicit trysts, even murders--the ramifications of which may have fallen onto poor Will Moir. Brimming with wit, laced with genuine surprise and featuring one of the most memorable (and unlikely) detectives in the cozy genre today, Eleven Pipers Piping mines the rich history of a small town to solve its most stunning crime.

C.C. Benison is the nom de plume for Winnipeg writer Doug Whiteway. Prior to Death in Cold Type, he had written three mystery novels in the Jane Bee series -- Death at Buckingham Palace, Death at Sandringham House, and Death at Windsor Castle, which have been translated into three languages. He has recently begun a new Father Christmas series, of which Twelve Drummers Drumming, Eleven Pipers Piping and Ten Lords A-Leaping have already been released.

A Carleton University journalism school graduate, Doug worked as a reporter and feature writer for the Dauphin Herald in the 1970s, and for the Winnipeg Free Press in the 1980s. He was the associate editor of The Beaver, Canada's History Magazine for seven years. As an independent writer, Doug has contributed to numerous magazines, newspapers, and corporate communications. He has been a recipient of a National Magazine Award, two Western Magazine Awards, and an Arthur Ellis Award for best first mystery novel.

Other titles by C.C. Benison

The Unpleasantness at the Battle of Thornford