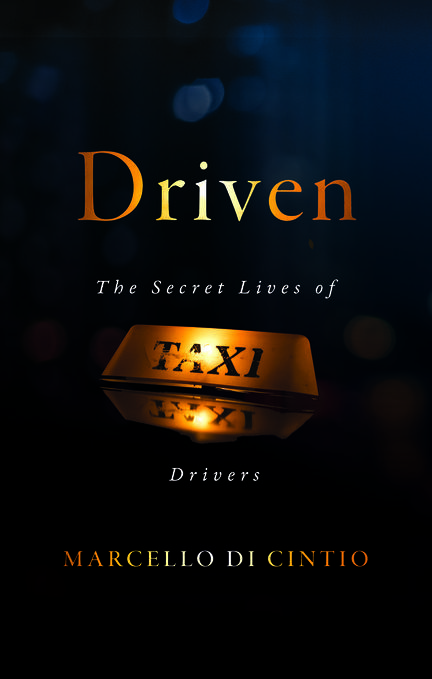 In conversations with drivers ranging from veterans of foreign wars to Indigenous women protecting one another, Di Cintio explores the borderland of the North American taxi.

“The taxi,” writes Marcello Di Cintio, “is a border.” Occupying the space between public and private, a cab brings together people who might otherwise never have met—yet most of us sit in the back and stare at our phones. Nowhere else do people occupy such intimate quarters and share so little. In a series of interviews with drivers, their backgrounds ranging from the Iraqi National Guard, to the Westboro Baptist Church, to an arranged marriage that left one woman stranded in a foreign country with nothing but a suitcase, Driven seeks out those missed conversations, revealing the unknown stories that surround us.

Travelling across borders of all kinds, from battlefields and occupied lands to midnight fares and Tim Hortons parking lots, Di Cintio chronicles the many journeys each driver made merely for the privilege to turn on their rooflight. Yet these lives aren’t defined by tragedy or frustration but by ingenuity and generosity, hope and indomitable hard work. From night school and sixteen-hour shifts to schemes for athletic careers and the secret Shakespeare of Dylan’s lyrics, Di Cintio’s subjects share the passions and triumphs that drive them.

Like the people encountered in its pages, Driven is an unexpected delight, and that most wondrous of all things: a book that will change the way you see the world around you. A paean to the power of personality and perseverance, it’s a compassionate and joyful tribute to the men and women who take us where we want to go.

Marcello Di Cintio is the author of four books, including the critically acclaimed Walls: Travels Along the Barricades. Walls won the 2013 Shaughnessy Cohen Prize for Political Writing and the City of Calgary W.O. Mitchell Book Prize and was nominated for the Charles Taylor Prize for Literary Non-Fiction and the BC National Award for Canadian Non-Fiction. Di Cintio’s essays have been published in the Walrus, Canadian Geographic, the International New York Times, Condé Nast Traveller, and Afar. He is a former writer-in-residence with the Calgary Distinguished Writers Program, the Iceland Writers Retreat, and the Palestine Writing Workshop. He lives in Calgary.

When I do end up taking a taxi, I tend to slip into the backseat and blurt out a destination. If I’m feeling beery and chatty, I might try to geolocate my cabbie’s name or accent in case he comes from somewhere I’ve been. This is less an attempt at camaraderie than a clumsy excuse to boast about my travels. “Is your accent Persian? I’ve been to Iran twice,” I might say. Or “You’re from Nigeria? I spent a year in West Africa. Never made it to Nigeria, though.” I am not proud of these inane exchanges. They are a more pompous version of “where are you from?”—the question I’d learn taxi drivers hate the most.

More often, though, I don’t speak at all, opting instead to mutely stare at my phone. I know I am not alone in this; a cabbie once told me his silent fares sometimes make him feel he is simply another part of the car. As passengers, we rarely wonder at the lives of those we know only by the reflection of their eyes in a rear-view mirror. We don’t inquire about the lives of our baristas or butchers or bank clerks, either, but the physical closeness between cabbie and passenger makes such silent disinterest feel unnatural. Antisocial, even.

I suspect this was always the case, however. I doubt Thornton Blackburn, who became Upper Canada’s first taxi driver in 1837, engaged much with his clients either. The configuration of Blackburn’s cab did not lend itself to conversation. Passengers sat inside the red-and-yellow horse-drawn carriage while Thornton worked the reins up top. Had they spoken to Thornton at all, his clients might have glanced at his black face, heard his unfamiliar accent, and asked him where he came from. “Kentucky,” he’d have said. Thorton’s clients, their brief pleasantries exhausted, might have returned to the pages of the week’s Upper Canada Gazette in the same way today’s passengers dissolve into the quiet glow of our Twitter feeds.

But Thornton’s life history hints at what we might be missing. A birthplace alone tells no story. Thornton and his wife Lucie did not just come from Kentucky. They came from slavery. The Blackburns escaped their slave masters in the high summer of 1831. They used forged documents to book passage across the Ohio River on a steamboat named the Versailles. Thornton and Lucie continued on to Detroit where they lived for two years before being arrested as runaway slaves. Then they escaped again. Lucie walked out of her prison cell after swapping clothes with a friend who agreed to take her place. Thornton was freed by a throng of Detroit’s Black citizens who armed themselves with pistols, knives, and clubs and overwhelmed the prison guards. The Blackburns reunited in Canada and were jailed again while their American owners sued for their extradition. But since Thornton and Lucie had committed no crime in Canada, the court would not send them back. The Blackburn’s exoneration established Canada as a safe haven for fugitive slaves from America.

Certainly none of Thornton’s taxi clients could have imagined their driver and his fearless wife had laid the tracks for the Underground Railroad. They could not have known that many of the 35,000 escaped American slaves who found safe haven in Canada owed their freedom to the man sitting on their taxi’s roof. They had no idea the story they weren’t hearing.

I started to wonder what stories I was missing. I’d spent years crossing borders around the world to document suffering and injustice. Resilience and love. Yet I hardly needed to leave Canada for these. I could’ve found almost as many stories on my cab rides to and from the airport because the taxi itself is a border. Beneath the roof-light of every taxi cab, a map of frontiers and dividing lines unfolds. The taxi occupies the margin between public and private space: accessible to all but simultaneously personal and intimate. The taxi is the border between autonomy and servitude. The cabbie has no superior to answer to, but each fare brings a new master to whom he briefly yields. Even a poor man is a boss in a taxi. The taxi can be the border between the wealthy and working class, and between white people and people of colour. Nowhere else do people so different share such close quarters and engage so little. If the US-Mexico border is, as writer Gloria Anzaldúa once described, the place “where the Third World grates against the first and bleeds,” a taxi is the place where the First World rubs against the Third and stares at its phone.

“No big event kicks Driven into gear. Nobody is a celebrity. There is no specific wrong to be righted, no particular injustice to be exposed. Indeed, Di Cintio consciously abjures the best-known tropes of cab driving ... Instead, he sticks to wanting to know about cab drivers, and this impulse—plain, old-fashioned inquisitiveness—is a journalistic force not to be underestimated … It takes up a subject so ordinary that you hardly notice it, but it becomes more interesting the closer you look. In fact, the closer you look, the more your view is not of a single subject at all but of an entire world.”—Literary Review of Canada

"A blend of reportage, social history, and personal profile, Driven is a triumph of curiosity and compassion."—The Walrus

"In Driven: The Secret Lives of Taxi Drivers, Marcello Di Cintio takes the time and trouble to engage with a cross-Canada range of people representing a profession too often taken for granted. Most of them are immigrants; all of them are subject to scarcely conceivable challenges and obstacles, often exacerbated by the onset of Uber."—Montreal Gazette

“Driven is a collection of short essays laying out the backstory for an eclectic array of immigrant cabbies ... All of the characters are driven by an incredible work ethic, where 17-hour days are not uncommon ... If you have spent any time at all in cabs, chances are you will have met some of the character types in this easy-reading collection.”—Winnipeg Free Press

"A varied, eclectic collection of stories from the frontlines of North America’s taxi industry, showcasing the indomitable hope of the people who literally keep our cities moving forward."—Maclean's

“Alongside Di Cintio we discover the magic behind these people and their stories, painting a picture of the often turbulent lives of these blue collar workers that are so often forgotten by society ... Di Cintio’s journalism skills are clearly evident in the rich descriptions and conversations he relays in these pages, but what makes his writing even better are the small asides he offers us when making personal observations about people, or poking fun at himself ... I was happily engaged from beginning to end.”—I’ve Read This

"Driven is an engaging, impeccably investigated, character-driven work of narrative nonfiction, told with Di Cintio’s wonderful dark humour, keen empathy, and rich journalistic eye. The book is a searing testament to the power of untold stories, of people who exist in the margins, of hidden histories, as well as an examination of Canada’s immigration laws. Driven urges us to rethink the enduring toll on those individuals who labour for us and take us where we need to go. A truly fine blend of heart-break, guffaws, and research."—Lindsay Wong, author of The Woo-Woo and My Summer of Love and Misfortune

"In these deeply researched and richly—often shockingly—detailed portraits of Canadian taxi drivers from all over the world, Di Cintio reveals, among other things, the heavy price exacted by getting here, and staying here. The funny, savage, and poignant stories in these pages give a fresh urgency to an old saying that all of us should remember the next time we get into a taxi: 'Be kind, for everyone you meet is fighting a hard battle.'"—John Vaillant, author of The Tiger: A True Story of Vengeance and Survival

"An astonishing book about folks from all over, many of whom have been through total hell but have somehow made their way out ... You never know who's driving you. Each person contains multitudes."—Margaret Atwood on Twitter

“Fascinating … Nuanced … In Driven, Di Cintio stayed in his own country and paid close attention to the men and women most of us take for granted. Most were immigrants. Many came from war-torn nations. Many were what Di Cintio calls ‘chess masters of their own lives,’ possessing a genius and ingenuity that few of us recognize.”—Calgary Herald

"Di Cintio weaves together history with a sense of place and infuses character with dialogue and humor ... masterful."—Selma Dabbagh, The Electronic Intifada

Other titles by Marcello Di Cintio

Pay No Heed to the Rockets

Palestine in the Present Tense

Pay No Heed to the Rockets

Palestine in the Present Tense

Travels Along the Barricades

A Journey into the Heart of Iran