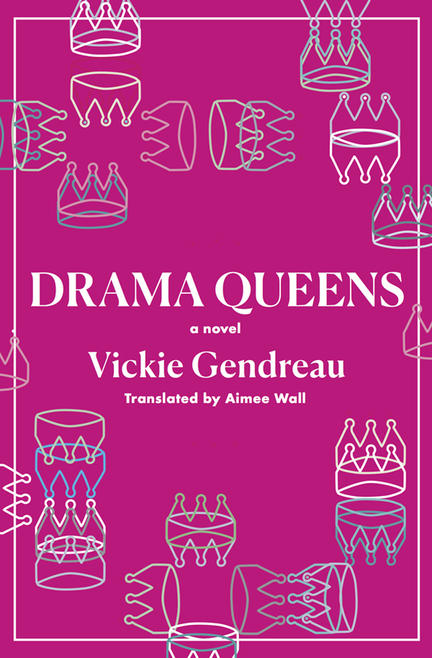 At the book fair in Rimouski, a woman picked up my first book to read the back cover. She put it back down, avoiding my eyes. It's heavy, cancer and death and all that. I wish books were more interactive. Like video game controllers. They could vibrate at the end of each chapter. But that's not how life works. I wonder what death is like. Do you vibrate? Do the words GAME OVER appear?

In 2012, Vickie Gendreau was diagnosed with a brain tumour and wrote a book narrating her own death. Testament could have been Gendreau's first and only novel, but she kept writing, furiously, until the very end.

Published posthumously after Gendreau's death in 2013 at age 24, Drama Queens continues her exploration of illness and death that began in Testament, but with even greater urgency and audacity. In her singular voice, Gendreau mixes genres and forms, moving from art installations to fantastical little films to poetry, returning again and again to a deeply raw and unflinching narrative of her increasingly difficult days.

With rage, dark humour, and boundless spirit and imagination, Drama Queens, translated by Aimee Wall, records the daily life of a young woman living with a failing body, the end in sight, and still so much to say.

"In addition to confronting her own imminent mortality, Gendreau takes determined ownership of her legacy." —Quill and Quire

"The journey through the end of Gendreau's life and beyond remains delicate, introspective, and wholly unusual. It is a literary trip worth taking." —Publishers Weekly

Vickie Gendreau was born in Montréal in 1989. While working in Montréal strip clubs from October 2009 to June 2012, she was also active in the literary community, where she participated in events like the Off-Festival de poésie de Trois-Rivières. She was diagnosed with a brain tumour in 2012, and passed away a year later. Her first novel, Testament, written after her diagnosis, was published in the fall of 2012 and longlisted for the 2013 Prix littéraire France-Québec. Her second novel, Drama Queens, was published in 2014. The English adaptation of Testament, translated by Aimee Wall, is forthcoming from BookThug in the fall of 2016.

Newfoundland-native Aimee Wall is a writer and translator. Her essays, short fiction, criticism and reviews have appeared in numerous publications, including Maisonneuve, Matrix Magazine, the Montreal Review of Books, and Lemon Hound. She holds a Master of Arts degree in Translation Studies from Concordia University. She lives in Montréal.

Newfoundland-native Aimee Wall is a writer and translator. Her essays, short fiction, and criticism have appeared in numerous publications, including Maisonneuve, Matrix Magazine, the Montreal Review of Books, and Lemon Hound. Wall's translations include Vickie Gendreau’s novels Testament (2016), and Drama Queens (2019), and Sports and Pastimes by Jean-Philippe Baril Guérard (2017). She lives in Montreal. We, Jane is her first novel.

"Extraordinary, fragmented writing, sudden illuminations, sensational passages followed by moving moments, an exhilarating imagination, and with all that, energy, and power." —Le Devoir,

"As she writes against her own death, Gendreau is a showy, insistent stylist; a diva; but a sad, sleepless, lonely one. She groans that her 'story to break your heart is not working,' but it is. She demanded to have the last word on her life and her work, and we have to give it to her." —Montreal Review of Books

Other titles by Vickie Gendreau

Other titles by Aimee Wall