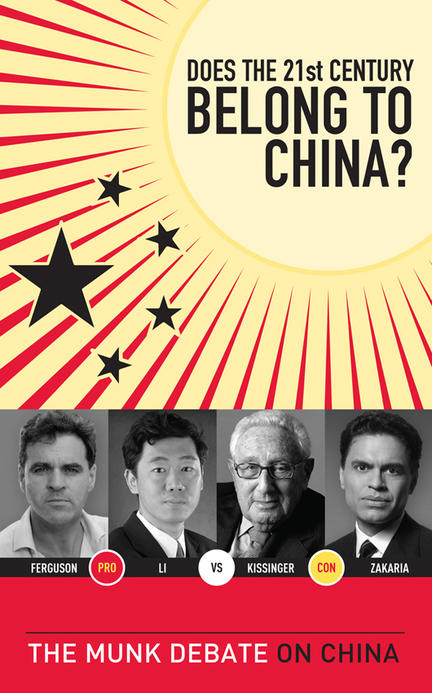 Is China's rise unstoppable? Powered by the human capital of 1.3 billion citizens, the latest technological advances, and a comparatively efficient system of state-directed capitalism, China seems poised to become the global superpower this century. But the Middle Kingdom also faces a series of challenges. From energy scarcity to environmental degradation to political unrest and growing global security burdens, a host of factors could derail China's global ascent.

In this edition of The Munk Debates - Canada's premier international debate series - former U.S. Secretary of State Henry Kissinger and CNN's Fareed Zakaria square off against leading historian Niall Ferguson and world-renowned economist David Daokui Li to debate the biggest geopolitical issue of our time: Does the 21st century belong to China?

Highly electrifying and thoroughly engrossing, the Munk Debate on China is the first formal public debate Dr. Kissinger has participated in on China's future, and includes exclusive interviews with Henry Kissinger and David Daokui Li.

Dr. Henry Kissinger was the 56th Secretary of State of the United States from 1973 to 1977. He is one of the world's most influential commentators on geopolitics. Among his many accomplishments as a public servant Dr. Kissinger has been credited for normalizing relations between the United States and China at a crucial juncture in the history of both countries. After leaving government service, he founded Kissinger Associates, an international consulting firm, of which he is chairman. Dr. Kissinger received the Nobel Peace Prize in 1973 and the Presidential Medal of Freedom (America's highest civilian award) in 1977.

Niall Ferguson is the Laurence A. Tisch Professor of History at Harvard University and William Ziegler Professor of Business Administration at Harvard Business School. He is also a Senior Research Fellow at Jesus College, Oxford, and a Senior Fellow at the Hoover Institution, Stanford University. He is the author of numerous bestselling books, including The Ascent of Money. A prolific commentator on contemporary politics and economics, Ferguson is a contributing editor for the Financial Times and senior columnist with Newsweek.

Fareed Zakaria is host of CNN's flagship international affairs program, Fareed Zakaria GPS, which won the 2012 Peabody Award. He is also the editor-at-large of Time, contributing editor at The Atlantic, a Washington Post columnist, and a former editor of Newsweek International. He is the author of the international bestsellers, The Future of Freedom and The Post-American World: Release 2.0. He was described by Esquire as “the most influential foreign policy adviser of his generation” and was included on Foreign Policy’s list of “Top 100 global thinkers.”

David Daokui Li is the Director of the Center for China in the World Economy at the Tsinghua University School of Economics and Management in Beijing. He holds a Ph.D. in economics from Harvard University, and is one of three academic members of the monetary policy committee of the central bank of China. He is also a delegate to the Beijing People's Congress and a member of the Chinese People's Political Consultative Committee.

[The Munk Debates are] a significant forum for discussing global issues of our age...balanced and thoughtful...

Other titles by Niall Ferguson

Has the European Experiment Failed?

The Munk Debate on Europe

Other titles by Fareed Zakaria

Has Obama Made the World a More Dangerous Place?

Can the World Tolerate an Iran with Nuclear Weapons?

The Munk Debate on Iran