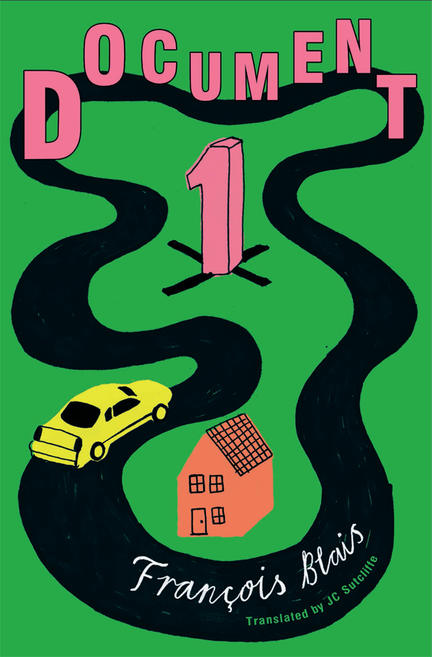 Tess and Jude live in small-town Quebec and spend their time travelling all across North America—using Google maps—which provides them the luxury of adventure while remaining in the comfort of their own home. But Tess and Jude are dreamers, and their online adventures eventually give rise to a desire to actually travel somewhere. They settle on Bird in Hand, Pennsylvania, and begin scheming to raise the cash they'll need for the trip.
After a series of hilarious ideas that never pan out, they turn to a local experimental author (who has a major crush on Tess) and convince him to apply for an arts council grant on their behalf. But when they actually receive the grant money, can the pull it all together for a real adventure?
Funny, smart and wonderfully human, Document 1 is a tragicomic tale of two dreamers and their quest for adventure, as well as a satirical take on the world of letters.

"Who knew that I would fall so in love with a book of metafiction starring two hapless, completely self-sabotaging scammers and featuring a little light fraud, a list of all the places in Kentucky with the word “lick” in the name, and a female dog named Steve? And yet, here I am, wanting to go back to the beginning and read it all over again. Ridiculous and hilarious, completely unique and yet overwhelmingly relatable, Document 1 is a quirky little gem of a book." —Amy Jones, author of We're All In This Together

"A perfect mix of humour and bite, Document 1 is the best go nowhere travel adventure book I've read in a long time. Never underestimate a pair of dreamers equipped with a Monte Carlo car and a dog named Steve." —Brian Francis, author of Fruit and Natural Order

François Blais is one of the most exciting contemporary voices of Quebec literature. Considered an underground superhero of French writing, he is the author of 9 novels and a collection of short stories. Document 1, which was released in French in 2013, is his first novel to be translated into English.

J. C. SUTCLIFFE is a translator, writer, and editor. Her translation of Back Roads by Andrée A. Michaud was a finalist for the Governor General’s Literary Award. Her other translations include Mama’s Boy and Mama’s Boy Behind Bars by David Goudreault, Document 1 by François Blais, and Worst Case, We Get Married by Sophie Bienvenu. She has written for the Globe and Mail, the Times Literary Supplement, and the National Post, among others. She lives in Peterborough, Ontario.

Other titles by François Blais

A Basic Income for all Canadians

Other titles by J.C. Sutcliffe

For Simple and Sustainable Living

Worst Case, We Get Married

Get Out Of Town: 11 Literary Getaways

Books that take you places.

All Books Are Beach Books: Get Your Summer Reads Locked In

From this eclectic selection, you're sure to find a book that suits you perfectly.