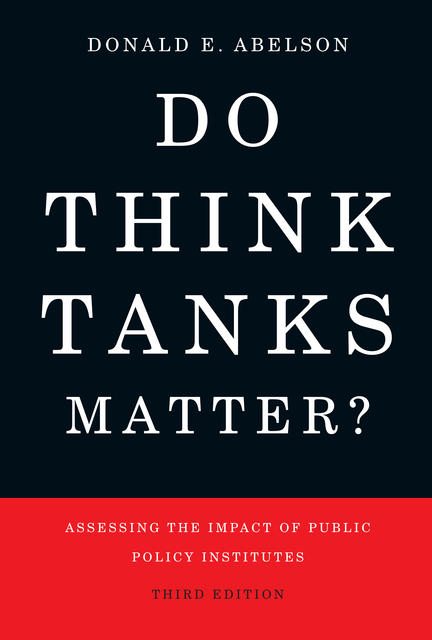 It is often assumed that think tanks carry enormous weight with lawmakers and other key stakeholders. In Do Think Tanks Matter? Donald Abelson argues that the question of how think tanks have evolved and under what conditions they can and do have an impact continues to be ignored.

Think tank directors often credit their institutes with influencing major policy debates and government legislation, and many journalists and scholars believe the explosion of think tanks since the latter part of the twentieth century is indicative of their growing importance in the policy-making process. Abelson goes beyond assumptions, highlighting both the visibility and relevance of public policy institutes in what has become a contentious and polarized political arena in the United States, and in Canada, where, despite recent growth in numbers, they enjoy less prominence than their US counterparts. By focusing on how think tanks engage in issue articulation, policy formation, and implementation, Abelson argues that they have helped to shape the political dialogue and the policy preferences and choices of decision-makers, but in different ways and at different stages of the policy cycle.

This expanded and revised third edition includes additional institutional profiles of key think tanks, an updated chapter on presidents and think tanks, a new chapter on the efforts of a group of public policy institutes to shape the discourse around the possible construction of the controversial Keystone XL pipeline, and dozens of new graphs and tables that track the public visibility and perceived policy relevance or impact of top-tier think tanks.

Donald E. Abelson is professor and chair, political science, and co-director, Centre for American Studies, The University of Western Ontario. He is the author of Do Think Tanks Matter? Assessing the Impact of Public Policy Institutes.

Other titles by Donald E. Abelson

The Myth of the Sacred

The Charter, the Courts, and the Politics of the Constitution in Canada