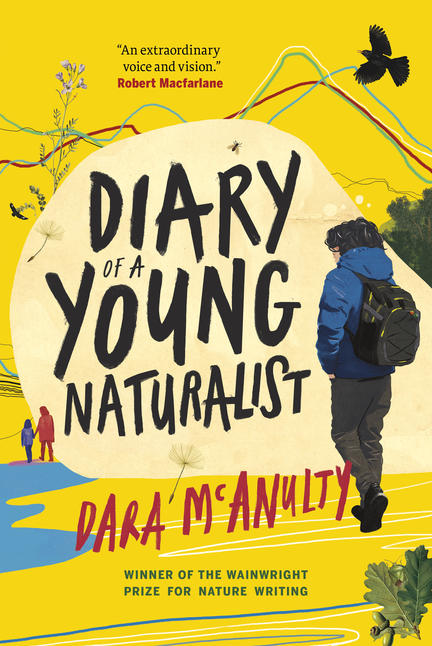 “Reflects great admiration and wonder for all humpback whales ... A true homage to these wondrous creatures.” —Kirkus (STARRED Review)

“Remarkable for almost too many reasons to name. Along with Greta Thunberg, [Dara McAnulty] is on his way to becoming one of the most visible environmental campaigners of his generation.”
—The Globe and Mail

BOOK OF THE YEAR: THE GUARDIAN

Winner of the 2020 Wainwright Prize for Nature Writing

“Brave, poetic, ethical, lyrical” (Robert Macfarlane), Diary of a Young Naturalist vividly explores the natural world from the perspective of an autistic teenager juggling homework, friendship, and campaigning for the environment.

Diary of a Young Naturalist chronicles the turning of fifteen-year-old Dara McAnulty’s world. From spring and through a year in his backyard in Northern Ireland, McAnulty spent the seasons writing. These stunning, evocative, and moving diary entries about his connection to wildlife and the way he sees the world are raw in their telling. Above all, Diary of a Young Naturalist portrays McAnulty’s intense connection to the natural world.

“I was diagnosed with Asperger’s/autism aged five... By age seven I knew I was very different, I had got used to the isolation, my inability to break through into the world of talking about football or Minecraft was not tolerated. Then came the bullying. Nature became so much more than an escape; it became a life-support system.”

Dara McAnulty is a naturalist, conservationist, and activist. He's received many awards for his conservation work, and he's written and presented numerous natural history programs for BBC radio and television. McAnulty is the youngest ever recipient of the Royal Society for the Protection of Birds medal for conservation, and he lives with his family and Rosie the rescue-greyhound at the foot of the Mourne Mountains in Northern Ireland. Diary of a Young Naturalist is his first book.

“McAnulty ... is fast becoming one of Britain and Ireland’s most acclaimed nature writers for work that is brimming with his passion as well as open about his autism.”
—The New York Times

“A few hours reading this intimate, sensitive, deeply felt memoir had the same [medicinal] effect on me, lifting my spirits and giving me a great deal of hope for the future, simply that young people like Dara McAnulty are alive and writing in the world.”
—The Guardian

“Remarkable for almost too many reasons to name … Along with Greta Thunberg, [Dara McAnulty] is on his way to becoming one of the most visible environmental campaigners of his generation.”
—The Globe and Mail

“[A] stunning debut ...Much like fellow activist Greta Thunberg, McAnulty sees his passion for climate justice as his superpower. ...This should be required reading.”
—Publishers Weekly

“McAnulty displays an astounding ability to capture and articulate his feelings and the nuances of the natural world, and his sincere compassion and lyrical prose captivate... A heartfelt, uplifting, hopeful memoir from a talented new voice in nature writing.”
—Kirkus Reviews

“Dara’s insights into his own life and the natural world are well beyond his years, as are his writing style and lyricism.”
—Green Teacher

“In this lyrical and often dazzling memoir, 17-year-old Dara McAnulty brings readers into close communion with the natural world while offering an intimate look at what it's like to live with autism. ...Voices like his—and books like this one—empower us to appreciate and protect our planet.”
—Scientific American

“McAnulty is fiercely attuned to his own moods, and at a time when we’re increasingly aware of the health benefits of the outdoors, his ability to medicate with nature strikes a powerful chord”
—The Guardian

“Dara McAnulty is a remarkable young writer and devoted environmental activist whose passion for nature and love for his family fill this book.”
—David Suzuki

“Brilliant, heartfelt… Diary of a Young Naturalist" is a remarkable book, the most moving memoir I have read in years.”
— Minneapolis Star Tribune

“Dara’s is an extraordinary voice and vision: brave, poetic, ethical, lyrical, strong enough to have made him heard and admired from a young age.”
—Robert Macfarlane
“Amazing. Dara McAnulty is our next great nature writer.”
—Richard Louv, author of Our Wild Calling and Last Child in the Woods

“Dara McAnulty is a kid who relishes the beats of a butterfly wing against his chest. And who wouldn’t? His voice is original, poetic, joyous, and humane. In sharing his passion for the natural world, he shows the rest of us what we’ve forgotten to see. We are lucky to have him.”
—Florence Williams, author of The Nature Fix

“A beautifully written, profoundly important classic of nature writing that will ignite a passion for the wild in every reader. A stunning achievement. I adored it.”
—Lauren St John

“McAnulty’s writing glows with his deep sympathy for the natural world.”
—Tim Flannery

“Like reading William Blake or Ted Hughes, it really is a strange and magical experience...surely one of the most talked about nature books, or any books, this year.”
—The Daily Mail