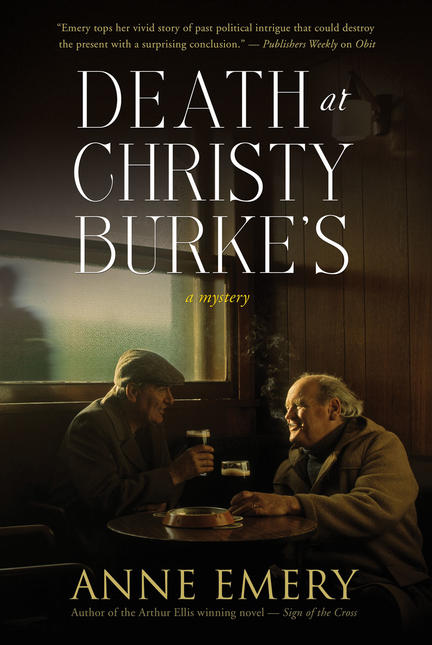 There’s a killer on the premises of Christy Burke’s pub in Dublin, according to graffiti spray-painted on the wall. Father Brennan Burke, Christy’s grandson, is asked to investigate the vandalism. Brennan has been tending the bar a bit himself and is not all that keen on probing into the lives of his clientele. But he has little choice once a body is found and the property investigation becomes a murder inquiry.

The pub’s current owner, issuing orders from his cell in Mountjoy Prison, wants the problem solved, and for reasons of his own does not want the police anywhere near the building. Brennan enlists the help of his pal Monty Collins and fellow priest Michael O’Flaherty, and the three of them uncover dark secrets in the lives of the pub regulars, secrets some might kill for.

For Brennan, the murder investigation is overshadowed by even more ominous events in Belfast, events that may be coming home to roost in Christy Burke’s. Sinister figures are spotted in and around the pub, people are being followed in the street, and Brennan comes to possess explosive information that he cannot reveal to security forces or to anyone else. Brennan is compelled to take a hard look at Irish history and his family’s place in it, and Michael’s sunny optimism about his ancestral home is about to be sorely tested, when an act of violence in Northern Ireland sends out shock waves that reverberate all the way to Dublin.

Anne Emery is a graduate of Dalhousie Law School. She has worked as a lawyer, legal affairs reporter, and researcher. She lives in Halifax, NS, with her husband and daughter. The other books in the Collins-Burke mystery series are Sign of the Cross, winner of the 2007 Arthur Ellis Award for Best First Novel; Obit (2007); Barrington Street Blues (2008); Cecilian Vespers (2009); and Children in the Morning (2010).

Nobody loved Ireland like Michael O’Flaherty. Well, no, that wasn’t quite the truth. How could he presume to make such a claim over the bodies of those who had been hanged or shot by firing squad in the struggle for Irish independence? Or those who had lived in the country all their lives, in good times and in bad, staving off the temptation to emigrate from their native soil? Nobody loved Ireland more than Michael did. He was on fairly safe ground there. He was a student of history, and his story led him straight back to Ireland. A four- cornered Irishman, he had four grandparents who emigrated from the old country to that most Irish of Canadian cities, Saint John, New Brunswick. His mother was fourteen when her parents brought her over on the boat in 1915, and Michael had inherited her soft lilting speech.

He was in the old country yet again. How many times had he been here? He had lost count. Monsignor Michael O’Flaherty cut quite a figure in the tourist industry. The Catholic tourist industry, to be more precise. Every year he shepherded a flock of Canadian pilgrims around the holy sites of Ireland: Knock, Croagh Patrick, Glendalough. And he showed them something of secular Ireland as well — all too secular it was now, in his view, but never mind. He conducted tours of Dublin, Cork, Galway; it varied from year to year. All this in addition to his duties as pastor of St. Bernadette’s Church in Halifax, Nova Scotia. He had moved to Halifax as a young priest, after spending several years in the parishes of Saint John. Why not pack his few belongings in a suitcase and cross the ocean once and for all, making Ireland his home? Well, the truth was, he was attached to Nova Scotia, to his church, and to the people there. He had made friends, especially in the last couple of years. And two of those friends were in Dublin right now. He was on his way to meet them, having seen his latest group of tourists off at the airport for their journey home to Canada.

He looked at his watch. It was half-noon. Brennan Burke had given him elaborate directions but there was no need. Michael knew the map of Dublin as well as he knew the Roman Missal, and he was only five minutes away from his destination at the corner of Mountjoy Street and St. Mary’s Place. His destination was Christy Burke’s pub.

Michael, decked out as always in his black clerical suit and Roman collar, kept up a brisk pace along Dominick Street Upper until he reached Mountjoy and turned right. A short walk up the street and there it was. This was an inner-city area of Dublin and it had fallen on hard times. But the pub had a fresh coat of cream-coloured paint. There was a narrow horizontal band of black around the building above the door and windows. Set off against the black was the name “Christy Burke” in gold letters. Lovely! He pushed the door open and stepped inside. It took a moment for his eyes to adjust to the smoke and the darkness after the bright July sunshine.

Michael joined his friends at their table, where a pint of Guinness sat waiting for him. Brennan Burke was a fellow priest, Michael’s curate technically. But it was hard to think of Burke, with his doctorate in theology and his musical brilliance, as anybody’s curate. He had lived here in Dublin as a child, then immigrated to New York before he joined Michael at St. Bernadette’s in Halifax. It was a long story. Christy Burke was Brennan’s grandfather, long deceased by now, of course. Brennan himself was fifty or a little over. Young enough to be Michael’s son, if Michael had been tomcatting around in his seminary days, which he most certainly had not! In any case, they looked nothing alike. Brennan was tall with greying black hair and black eyes. Michael was short and slight, with white hair and eyes of blue. Monty Collins, though, could be mistaken for Michael’s son. Same colour eyes and fair hair. A few years younger than Brennan and deceptively boyish in appearance, Monty was their lawyer and confidant.

Michael greatly enjoyed their company. So it was grand that they were able to arrange this time together in Dublin. Brennan had signed on to teach at the seminary in Maynooth for six weeks. Michael was on an extended vacation, with the blessings of his bishop. It was the first time he had been away for more than two weeks, ever. And why not? In any other job, he’d be retired by now! They had left the home parish in the capable hands of another priest they both knew. Monty, too, was on vacation. Told his office he was taking a month off. Made whatever arrangements he had to make for his law practice, and boarded the plane. So here they were.