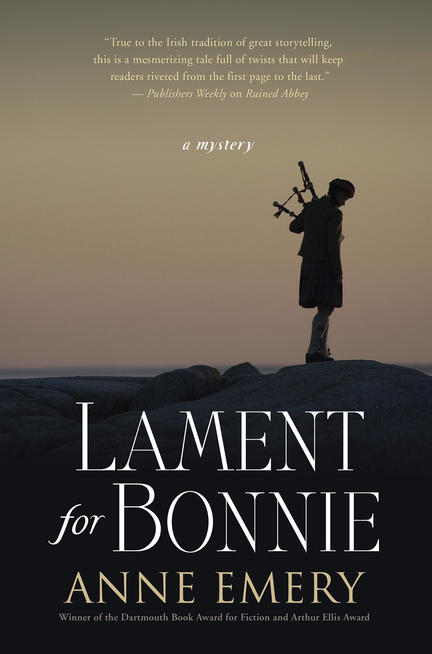 “This story is irresistible.” — Publishers Weekly

Twelve-year-old Bonnie MacDonald — the beloved stepdancing, fiddling youngest member of Cape Breton’s famed Clan Donnie band — vanishes after a family party. No one thinks Bonnie ran away. Maura MacNeil, cousin to Clan Donnie, offers her husband’s legal services to the family as the police search for the missing girl. But fame attracts some strange characters, and Clan Donnie has its groupies. So, it turns out, does lawyer and bluesman Monty Collins.

Monty and Maura’s daughter, Normie, is much closer to the action and, as she gets to know her cousins, learns things she wishes she never had. She has nightmares — visions? — that bring her no closer to finding Bonnie. Her spooky great-grandmother senses the presence of evil in their village — the kind of evil RCMP Sergeant Pierre Maguire left the big city to escape. But he finds a vein of darkness running beneath the beauty and vibrant culture of Cape Breton. And he learns that this isn’t the only dark passage in the Clan Donnie family history.

Named “one of Canada’s finest novelists” (Ottawa Review of Books), Anne Emery is a lawyer and the author of the Collins-Burke mystery series. She has won an Arthur Ellis Award, an Independent Publisher Book Awards silver medal, and a Dartmouth Book Award. She lives in Halifax, Nova Scotia.

“The story is both an engaging mystery and an exploration of the unique and enduring culture built by Scottish settlers in Cape Breton . . . This story is irresistible.” — Publishers Weekly

“The author’s ability to say more with less invites readers along for the dark ride, and the island’s Celtic culture serves as a stage to both the story’s soaring narrative arc and a quirky cast of characters, providing a glimpse into the Atlantic Canadian communities settled by Scots over two hundred years ago.” — Celtic Life

“Once again, Anne Emery proves she’s one of the best of Canada’s new group of crime authors. Lament For Bonnie is a fine mystery with terrific characters and a solid plot, but it’s also an exploration of a unique Canadian culture: the Celtic musicians of Cape Breton whose ballads and dances are part of our shared heritage . . . This is an irresistible read from start to finish.” — Globe and Mail

“This novel is the work of a skilled writer who knows her craft . . . a very satisfying addition to Anne Emery’s continuing series of mystery novels.” — The Chronicle Herald

“Lament for Bonnie is a good mystery in this entertaining series set in eastern Canada.” — Glenn Perrett