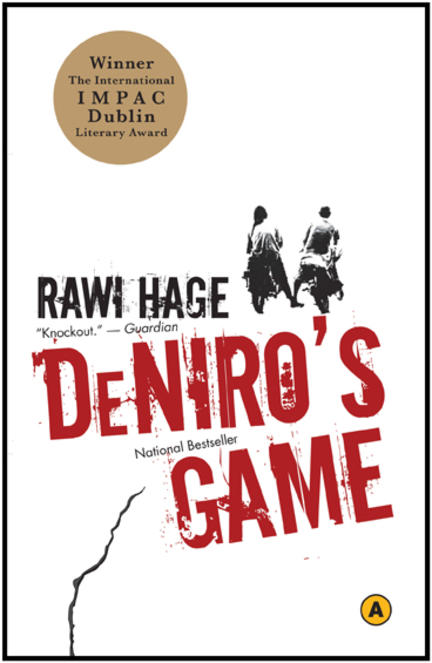 There is but one truly serious philosophical problem, and that is suicide. In Rawi Hage's unforgettable novel, winner of the 2008 IMPAC Prize, this famous quote by Camus becomes a touchstone for two young men caught in Lebanon's civil war. Bassam and George are childhood best friends who have grown to adulthood in war torn Beirut. Now they must choose their futures: to stay in the city and consolidate power through crime; or to go into exile abroad, alienated from the only existence they have known. Bassam chooses one path: obsessed with leaving Beirut, he embarks on a series of petty crimes to finance his departure. Meanwhile, George builds his power in the underworld of the city and embraces a life of military service, crime for profit, killing, and drugs.

Told in the voice of Bassam, De Niro's Game is a beautiful, explosive portrait of a contemporary young man shaped by a lifelong experience of war. Rawi Hage's brilliant style mimics a world gone mad: so smooth and apparently sane that its razor-sharp edges surprise and cut deeply. A powerful meditation on life and death in a war zone, and what comes after.

Rawi Hage was born in Beirut, Lebanon, and lived through nine years of the Lebanese civil war. He is a writer, a visual artist, and a curator. Hage's first book, De Niro's Game, won the IMPAC Dublin Literary Award, was a finalist for numerous prestigious national and international awards, including the Scotiabank Giller Prize and the Governor General's Literary Award, and has been translated into several languages and published around the world. His second novel, Cockroach, won the Hugh MacLennan Prize for Fiction andwas a finalist for the Scotiabank Giller Prize, the Governor General's Literary Award, and the Rogers Writers' Trust Fiction Prize. Rawi Hage lives in Montreal.

...the incredibly affecting tale of a young man's fight to remain sovereign, intellectually and politically...

The novel is full of poetic descriptions of the surreal and horrific nature of war delivered through Bassam's stream of consciousness narrative. There are lines that you are compelled to read again and again due to their raw beauty and their insight into how war irreparably shapes human psyches.

A magnificent achievement...the work of a major literary talent.

The excitement of Hage's action-packed plot is supplemented by his visually and viscerally descriptive language...

...De Niro's Game discloses much to a Canadian audience largely sheltered from the physical and emotional effects of war...Bassam's voice, though emotionally restrained, tells a story that is not only vivid, but also illuminating.

De Niro's Game is a feverish nightmare of a book, written with a distinctly European flair...it stubbornly refuses to offer the reader any easy comfort...[readers] will be seduced by the undoubted visceral power of this suddenly current narrative.

East meets West in this stunning first novel yielding a totally fresh perspective on war-torn Beirut...Both terse and lyrical, Hage's narrative is a wonder, alternately referencing modern American action heroes and ancient Arabic imagery. The blend of the two is as startling as it is beautiful.

Other titles by Rawi Hage