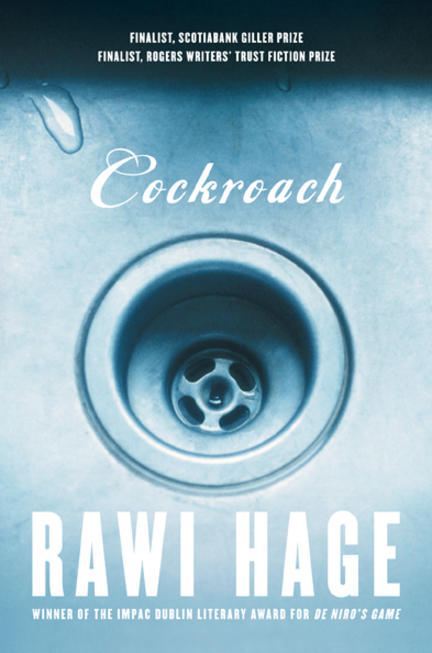 The novel takes place during one month of a bitterly cold winter in Montreal's restless immigrant community, where a self-described thief has just tried but failed to commit suicide. Rescued against his will, the narrator is obliged to attend sessions with a well-intentioned but naive therapist. This sets the story in motion, leading us back to the narrator's violent childhood in a war-torn country, forward into his current life in the smoky emigre cafes where everyone has a tale, and out into the frozen night-time streets of Montreal, where the thief survives on the edge, imagining himself to be a cockroach invading the lives of the privileged, but wilfully blind, citizens who surround him.

In 2008, Cockroach was a finalist for the Scotiabank Giller Prize, the Governor General's Literary Award, and the Rogers Writers' Trust Fiction Prize. It won the Paragraphe Hugh MacLennan Prize for Fiction, presented by the Quebec Writers' Federation.

Rawi Hage was born in Beirut, Lebanon, and lived through nine years of the Lebanese civil war. He is a writer, a visual artist, and a curator. Hage's first book, De Niro's Game, won the IMPAC Dublin Literary Award, was a finalist for numerous prestigious national and international awards, including the Scotiabank Giller Prize and the Governor General's Literary Award, and has been translated into several languages and published around the world. His second novel, Cockroach, won the Hugh MacLennan Prize for Fiction andwas a finalist for the Scotiabank Giller Prize, the Governor General's Literary Award, and the Rogers Writers' Trust Fiction Prize. Rawi Hage lives in Montreal.

...Cockroach is the kind of alienated-outsider book the just don't write anymore...While his narrator stumbles through existence, cleaning toilets, and going in and out of lucid and devastating observations, Hage subtly builds a thriller in the background that climaxes written Jim Thompson-cold.

Hage is definitely the real deal...[Cockroach is] powerful, poetic...a near-thriller; you won't be able to put it down...The prose is tight, the haunting imagery beautiful and unsettling, and the setting vividly evoked.

The best novel I read this year was Rawi Hage's Cockroach...which tells the story of an ungrateful immigrant, filled with angst and attitude, in a Montreal which could be Kafka's Prague. It is a dark book, narrated with verve and brilliance. It made me jump for joy.

Cockroach echoes Hage's trademark concern for life's losers, for the dispossessed, the troubled and the despairing...In a novel laced with dark humour and scorn for the complacency toward suffering in contemporary society, Hage dissects the immigrant experience with incisiveness and a good degree of aplomb.

Cockroach is an unforgettable, good read.

[Hage is] an immensely talented writer [who presents a] fascinating portrait of a complex character who is not sure he's human.

Hage's look at the underbelly of organized religion and immigrant life in Canada is unflinching and grim; what's even more remarkable is that he has transformed that material into a page-turner. Cockroach's finely wrought scenes build in tension toward a conclusion that's fitting and yet unpredictable...Readers are bound to be seduced.

...a tour de force novel of fearsome wit, skilled prose, and impressive imagination...A beautiful, compelling, original work, one of the finest novels of the year.

Hage's largest debt is naturally to Kafka, but in grating these influences onto a Montreal immigrant's story, he has managed to recontextualize and transcend them...a potent, honest dissection of material that is too often ignored by Canadian writers.

Cockroach reveals Hage to be no mere fluke, but a fearless talent with his best years ahead.

Hage has done it again. He has produced an amazingly original and brilliant novel that shows he is no one-hit wonder, but a major force in Canadian literature.

Other titles by Rawi Hage