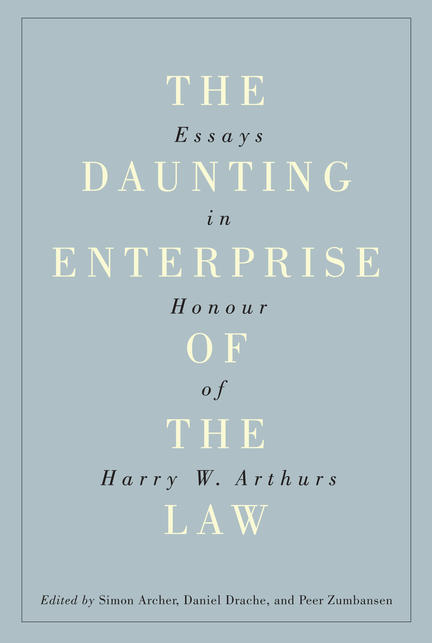 Professor emeritus at Osgoode Hall Law School and former president of Toronto’s York University, Harry W. Arthurs is one of Canada’s most widely respected scholars, educators, and policy makers in the world today. His enormous academic and institutional productivity has extended to administrative and labour law, legal pluralism and legal theory, and legal education.

Bringing together scholars of law, history, and political economy, The Daunting Enterprise of the Law applies the framework of Arthurs’s extraordinary scholarship to a series of themes running through current legal, economic, and political thought. Contributors from around the globe engage with Arthurs’s work in several fields and sub-fields and consider the past and future of industrial democracy, globalization, labour law, legal education, and legal theory in the twenty-first century. Through the process of surveying, evaluating, and reflecting upon Arthurs’s ideas and intellectual contributions, they further advance the reader’s understanding of labour law and industrial relations.

Remarkable in breadth and scope, The Daunting Enterprise of Law is both a celebration of Arthurs’s institutional achievements and policy leadership and an important contribution to contemporary scholarship.

Simon Archer is co-director of the Centre for Research in Comparative Law and Political Economy at Osgoode Hall Law School, York University, and practises with Koskie Minsky LLP in Toronto.

Daniel Drache is a leading expert on global trade governance and North American integration. He is the author of Borders Matter: Homeland Security and the Search for North America (2004), a revised edition of which was published in Spanish in 2007. The editor of a special edition of Canada Watch—“Deep Integration: North America Post-Bush”—he is also a member of the Centre for International Governance Innovations (CIGI) North American Portal advisory committee.

Peer Zumbansen is the inaugural professor of transnational law and founding director of the Dickson Poon Transnational Law Institute at King’s College, London.

Other titles by Simon Archer

Other titles by Daniel Drache

The War on Liberal Democracy

One Road, Many Dreams

Canada and Mexico at the Crossroads

Negotiating with a Sovereign Quebec

Other titles by Peer Zumbansen