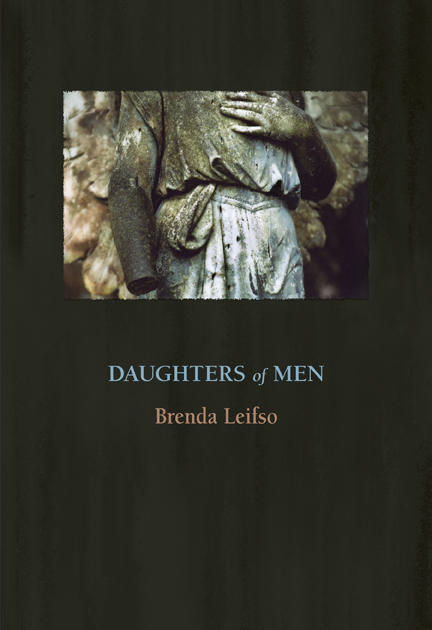 Vivid accessible poems revealing the mythic proportions of a seemingly simple, rural childhood and the passions that course through every life.

what do you do
with other people's memories
when they are carved into this land
the land offering up proof
? from “Prayer for Rain?

Brenda Leifso's first volume of poetry is a stunning debut: haunting, disturbing but resolutely beautiful. With an unflinching eye, Leifso explores the uncertainty of memory, the legacy of place, the powerful dynamics of sexuality and secrecy, and the violence inherent in family relations. Her central section, "The Theban Women," is a multi-voiced re-imagining of Euripides"s The Bacchae; this drama in verse gives voice to women long silent, and together with Leifso's more personal poems, it forms a book of exceptional power from a poet whose voice is as honest as it is beautiful.

"In Daughters of Men, Brenda Leifso demonstrates a subtlety of heart, mind and soul that represents a new level of maturity for poetry in the West. Her book encompasses, among other things, a Greek tragedy of inherited crime within the family which, for the one who does not share in it, provokes a slow-burning jealousy and sorrow at the exclusion. Is this a mind-set and verse that only a mad Alberta poet or Greek tragedian could invent? Or is it as simple as wanting to have one's rightful share — of the abuse and of the beauty, of a land and of a family. Brenda Leifso looks for the gold in the tar, and remarkably extracts it for her readers." — George McWhirter (Inaugural Poet Laureate of Vancouver)

Wild Madder is Brenda Leifso's third book of poetry, following Barren the Fury (Pedlar Press, 2015) and Daughters of Men (Brick Books, 2008), which was shortlisted for an Ottawa Book Award. Her poetry has been published in journals and anthologies across Canada, has won the Banff Centre Bliss Carman Poetry Award, and has been short- and long-listed for the CBC Literary prize. She is a freelance editor and occasional academic instructor, and also runs her own yoga business. She lives, gratefully, near the shores of Lake Ontario in Kingston, Ontario.

Other titles by Brenda Leifso