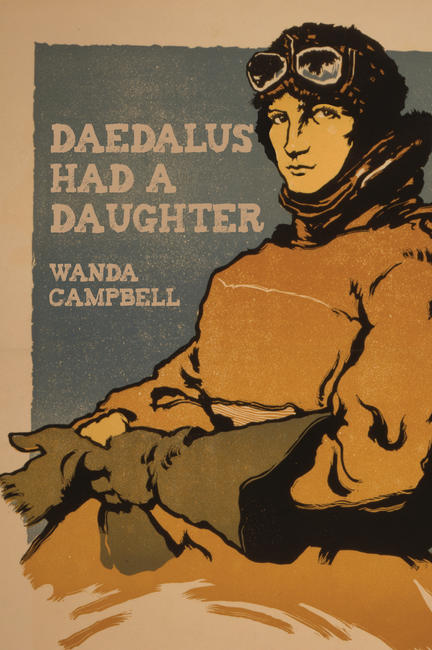 We all know what happened to Icarus, but what if there was one who lived to tell the tale?  Wanda Campbell's fourth collection of poetry offers alternatives to flying too close to the sun and sinking into the sea.  Beginning with ekphrastic poems responding to works by female artists such as Emily Carr and Frida Kahlo, Campbell considers the ways the love of art and the art of love help us to transcend the labyrinths of our lives.

Wanda Campbell was born and grew up in Andhra Pradesh, South India. She came to Canada at the age of ten, and is a passionate Canadian. She teaches Creative Writing and Women's Literature at Acadia University in Wolfville, Nova Scotia in view of the highest tides in the world. She has published a novel Hat Girl (2013) and four collections of poetry, Daedalus Had a Daughter (2011), Grace (2009), Looking for Lucy (2008), and Sky Fishing (1997), as well as the poetry chapbook Haw[Thorn] (2003). Her poems and stories have appeared in anthologies such as Landmarks: An Anthology of New Atlantic Canadian Poetry of the Land and Body Language, and in journals across Canada including Antigonish Review, Between the Lines, Contemporary Verse II, Dalhousie Review, Descant, Driftwood, existere, Fiddlehead, Gaspereau Review, Grain, Harpweaver, New Quarterly, Northern Cardinal Review, Queen's Quarterly, Room, Vallum, Wascana Review, and Windsor Review.

Excerpt: Daedalus Had a Daughter (by (author) Wanda Campbell)

Wings for Jessica Whitney Dubroff (1989-1996) Women Fly. That’s the claim embroidered in black letters on her pink baseball cap forever seven, she graces the cover of TIME no longer a little girl failing to pilot a plane across the continent but a parable I read on my flight to Toronto while outside my window the earth turns under her green quilt like a pregnant woman seeking ease I’m going to fly till I die says Jessica straight down like a lawn dart says an eyewitness we know, in the end, the grown-up pilot had taken over because his arms were more fractured than hers

Women Fly Harriet Quimby, first woman to fly the English Channel but everyone too busy salvaging Titanic dead to notice months later she was flung from her plane to be swallowed by that same ocean Amelia Earhart in leather and pearls, swallowed by the other ocean, then Christa McAuliffe first civilian in space swallowed by the sky there were women who broke records without being broken themselves but they are not the ones we remember Daedalus had a daughter

Self Portrait with Monkeys (oil on canvas 1943) Frida Kahlo I never painted dreams. I painted my own reality. — Frida Kahlo she is surrounded by monkeys with eyes as shiny as beads of a rosary or a gun they peer from the foliage or insinuate themselves into her body’s sentence they throw a casual arm around her neck or entwine her with tails as sinuous as snakes they finger the scarlet embroidery next to her heart and clasp the crisp white folds of her blouse but she has taken flight from a frame injured beyond imagining she is the clavicle butterfly pulsing in flesh shine and shadow she is the dark wings of her brows like the crows we drew before details devoured us she is the bird of paradise that flies from her ear as perfect as a peasant prayer

Rune Thorn. The name of the Old English runic letter how many are there scored by scalpel, staples, stitches the ancient alphabet of pain? one in eight a disease once distant suddenly everywhere each year our women dying one for every kilometre between Halifax and Calgary theories sprout like loosestrife along this dark highway but no certain knowledge just a threnody in the throats of birds on the green gown that slips from the shoulders of the road

“So what does this traveller from the Carnatic region of India bring to the reader in this her third book? Is it the spice and spirituality of that ancient civilization or, considering that her family emigrated to Canada when she was ten, the spice and spirituality of ours? There’s only one way to find out, and that is to plunge into the pages and discover what this high flyer has to offer. This is Wanda Campbell’s fourth collection. It consists of four sections: Group of Seven, HAW[THORN], Graduated to Glass and Women and Men. The second section was issued separately as a chapbook by Gaspereau.

Group of Seven is an interesting section. It contains seven poems, each of which opens with an epigraph from a different female artist, including Emily Carr, Georgia O’Keeffe and Frida Kahlo. Is this Campbell’s feminist response to the male dominance of Canada’s pictorial landscape? These ekphrastic poems are united by a common form – two triplets interrupted by a tabbed single line. “Self-Portrait with Monkeys,” bearing an inscription from Kahlo, demonstrates this form:

At first, one’s focus is on the alliteration that seems to dominate. But then, the two internal rhymes of the third line come into perspective – the first throwing the ending of the prior line onto the spondee that begins the third and giving a lilt to the two anapests that follow, the anapests ending in an interesting sight rhyme between “brows” and “crows.” There is also a subtle half rhyme at the start of the third stanza between “bird” and the first syllable of “paradise.” This demonstrates a mastery of word painting. The second section, “HAW[THORN],” creates a new dynamic. Each poem is fourteen lines long structured in three quatrains with an ending couplet. At sight, the first thing that comes to mind is the sonnet. But then you notice that the couplet is often written in the shape of an epitaph. This section is divided into two: in the first, there is an inscription of one part of the definition of “Haw”; in the second, of “Thorn.” This creates an interesting structure. However, there are times when the cleverness of the structure overpowers the poem. Occasionally Campbell’s poetic sensibility runs amok. For example, there is an overabundance of alliteration in the second stanza of “Hush Money”:

But then you come across some amazingly apt metaphorical narrative, such as the opening stanza of “Cabinet of Curiosities,” part of the “Thorn” subsection:

you say the lump in your breast felt like a pea under a mattress they cut it from your flesh but already the crab had scuttled away, mutations flowing through your body (32)

“Graduated to Glass” is again bound by a common structure. Each stanza is a quatrain, the last two lines of which are indented. “Snake on Display,” the poem that opens this section, provides a definite statement. Take these two quatrains which must be examined together in order to get their essence in its entirety:

Could these stanzas have been written in the aftermath of a divorce? Certainly, the first two lines can give rise to that image. The second line is definitely a critique of patriarchy reflected in the “snake” changing her “skin” into that which is desired by that ideology. There is a disdain for herself for having gone along with allowing herself to be placed on display. Now that she is liberated, she no longer has to be the diamond placed on display. She is free to be herself – almost – for those old bits keep rising up to remind her of the station for which she was bred.

The poems in “Women and Men” begins with the same form as those in “Graduated to Glass” but, midway through, change into a potpourri without any discernible reason. “Nueés Ardentes” is an interesting poem with an interesting title. One definition of “nueés ardentes” is “a French term applied to a highly heated mass of gas-charged ash which is expelled with explosive force and moves with hurricane speed down the mountainside,” generally associated with a volcanic explosion. The last stanza creates a host of images:

The primary image is that of Icarus’s plunge into the sea, his wings having melted when he came too close to the sun. A secondary is the trap sprung by the moment of passionate release during which one becomes ensnared.

Wanda Campbell is an amazing poet writing out of the foment of feminism – a necessary rebellion still.”

Other titles by Wanda Campbell

Essays on Her Works

Poems of India and Chile

Poems of India and Chile