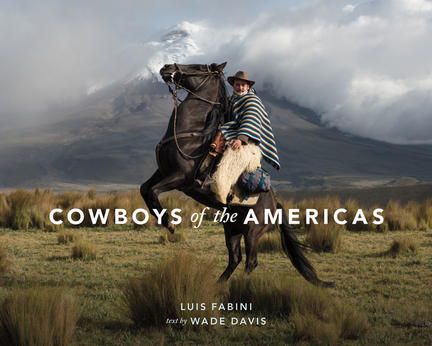 An awe-inspiring portrait of cowboys throughout the Americas in images and words and a passionate exploration of their bond with horses and the land.

For more than a decade, photographer Luis Fabini immersed himself in cowboy culture as he traveled through North and South America. This stunning collection of photographs from those travels reveals the cowboy who lives in silence and solitude, the interconnectedness of these men with the land, and a traditional way of life that exists on the outskirts of society but also vividly in our imaginations.

An eloquent text by anthropologist and author Wade Davis reflects on the long relationship between horses and humans, describes the significance of Fabini’s work, and illuminates the enduring spirit of cowboy culture.

Luis Fabini was born in Uruguay and began his career as a travel photographer in South America. His interest in photography began at age seven, when his father put a camera in his hands before the two embarked on a trip across the Andes. He lives in Brooklyn, New York.

Book recommendations for all kinds of readers.