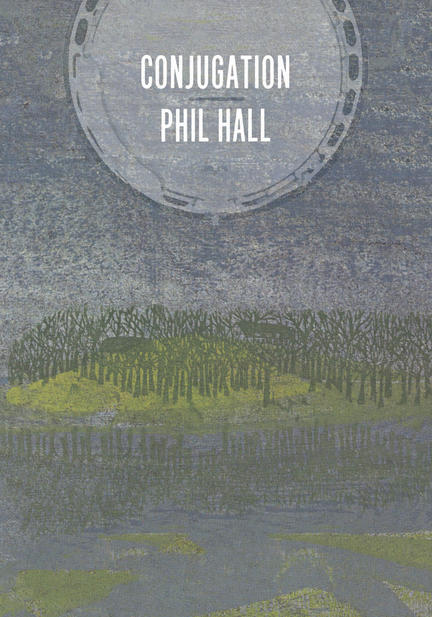 I am sitting outside at dawn on Otty Lake, where I live, in the woods. The light is coming over the trees, and each morning the poem is written as if right while it is being read.
A rough immediacy. Gap & Hum. Caesura. Syllables as musical notes.
The lyric weaving of honesty about the self--toward revelation & transformation.
My poetics has widened, here, to include more space, more primitive sounds and glyphs, less metaphor, less anecdote, more tangential conjugating...
My poetics, in its growing inclusiveness, is not sad but hopeful.
The term "conjugation" refers to more than the obvious grammatical movement of pronouns through time (I am / you are / they will be). For, in Biology, it also refers to the transfer of information between cells. And Conjugation--the new collection of poetry from Governor General's Literary Award- and Trillium Book Award-winning poet Phil Hall--sees an open realm where individual letters inside a word are each rolling through their possibilities, from A to Z. Thereby, the language in this, Hall's eighteenth book of poetry, and the fourth to be published by BookThug, travels into and out of itself, as he says, "escaping my ego, while revealing, word by slightly different word, my deeper connections and disconnections to things--to what used to be called poetry's 'subjects.'"

Replete with images of the natural world and in some cases, the mechanisms that transform it-horses, leaping fish, trees, canals and locks--Hall has created in Conjugation at once a return to the nature/nurture elements that have wound their way through his earlier collections, but also a versed ode to the discouragement that many Canadians have felt about the progression of their country and government over the past number of years.

As much care was taken with the writing of this collection as the shaping of the poems themselves. Hall's poems are shaped into a form of free-verse terza rima (2-line / 1-line alternating pattern), where spaces between phrases and words allow the syntax to be infused with floods of words from other angles. This results in a quilting or cross-hatching or braiding effect that ensures that readers will be captured in the flow of Conjugation's wordplay and the evolution that takes place through its pages.

Phil Hall’s first small book, Eighteen Poems, was published by Cyanamid, the Canadian mining company, in Mexico City, in 1973. Among his many titles are: Old Enemy Juice (1988), The Unsaid (1992), and Hearthedral – A Folk-Hermetic (1996). In the early 80s, Phil was a member of the Vancouver Industrial Writers’ Union, & also a member of the Vancouver Men Against Rape Collective. He has taught writing at York University, Ryerson University, Seneca College, George Brown College, and is currently the Writer in Residence at Queen's University. He has been poet-in-residence at Sage Hill Writing Experience (Sask.), The Pierre Berton House (Dawson City, Yukon), & elsewhere. In 2007, BookThug published Phil’s long poem, White Porcupine. Also in 2007. he and his wife, Ann, walked the Camino de Santiago de Compostela. He is a member of the Writers’ Union of Canada, and lives near Perth, Ontario. Recent books include An Oak Hunch and The Little Seamstress. In 2011, he won Canada’s Governor General’s Award for Poetry for his most recent collection, Killdeer, a work the jury called “a masterly modulation of the elegiac through poetic time.” Killdeer was also nominated for the 2012 Griffin Poetry Prize, and won the 2012 Trillium Book Prize.

"His gaze is not simply inward: these meditative poems take in the rural landscape of Eastern Ontario, the words of writers whose influence he honours and the nature of language itself. Like an auto mechanic working on an engine, Hall takes words and phrases apart, examines how they work, and tinkers." --Barb Carey, Toronto Star

Other titles by Phil Hall